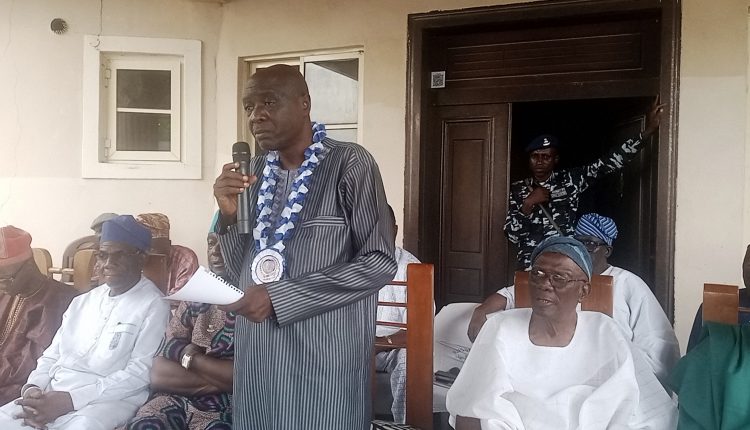 …My relationship with deputy governor, Bayo Lawal is a father-son – Hallelujah

Some stakeholders of the Peoples Democratic Party (PDP) across Oke-ogun on Friday converged on the residence of Senator Hosea Ayoola Agboola to strategies on the forthcoming general election.

According to Oyo Vanguard, the leadership of party in Oke Ogun reiterated commitment to the re-election of Governor Seyi Makinde and the success of the party across all levels in the forthcoming election.

During the meeting, the party received defectors from APC, Dr Oyedepo (Former Deputy Governor Candidate of Accord Party in 2015) and his supporters across Oke Ogun and The Oke-ogun Teslim Folarin Group’s Chairman Alh. Sulaiman Aderogba (SERIKI) and his supporters to PDP.

Various issues discussed at the meeting includes, preparation for the coming election, accommodating new members, working towards ensuring the success of the party, reconciling the aggrieved members of the party among other.

A leader of the party from Orelope, Hon. Adeniran advised that all those who had angrily left the party should all be reached out to and ensure all differences are settled.

Alhaja Arewa advise all elected and appointed members of government at both state and local government level to see this forthcoming election as a very important one, hence the need to achieve victory, all hands should be on deck and everyone should work in unison for the success of the party.

Sen. Hosea Ayoola Agboola while speaking reacted to the meeting of some leaders of the Party with the deputy governor, where they declared him as the leader of the party in Oke-ogun.

” I was returning from Abuja on Monday when the news got to me that some selected leaders of the party from the entire ten local government of Oke-ogun were having a meeting with the deputy governor, then I later heard that people from Itesiwaju were not among, then I began to smell foul play”

“These same people felt in order for them to be able to use Olaniyan, he needs to fight with Halleluyah, they were the same people who came to me saying Olaniyan shouldn’t be removed, but I clearly told them I can no longer deliver this message because the decision has been sealed already”

“I also informed the governor that our people are cooking another crisis again, and the governor promised to make sure he resolves every crisis”

During the meeting, Leaders of Oke-ogun Indigenous Youth Forum led by Com. Jonathan Ojedokun presented an award of merit to Sen. Alleluyah.

According to them, the award is in recognition of his immense efforts to enhance development of Oke-ogun and his unrivaled support for youths in the zone.

“What I have to say to you youth is that, you should come out and be seen in the party both at state and national level, if the party wants to do anything, they can’t do it without the youths, you should equally strive hard to be a good ambassador of Oke-ogun.

While wrapping up the meeting, the commissioner for Establishment, Hon. Siju Lawal said right now, we should lauch operation claim your unit, ward and local government.

“Whoever wants to claim leader should win his pooling unit, ward and council first, the he’ll see that he’ll be accorded the leadership he deserves even without demand.

The Meeting had in attendance relevant stakeholders of the party such as All party and council chairmen in Oke-ogun, all Youth leaders and women leaders, the Oyo North Senatorial excis 9f the party, Alhaji Alli Oyedeji from Kajola, Hon. Abass Olopoeyan from Kajola, Mrs. Kemi Olayiwola Bello ( Nat. Ex-Officio), Hon. Biodun Oni ( Commissioner for Environment), Hon. Siju Lawal (Comm. for Establishment), Mrs. Nike Arewa (Board Member), Alhaja Ganiya and host of others
.