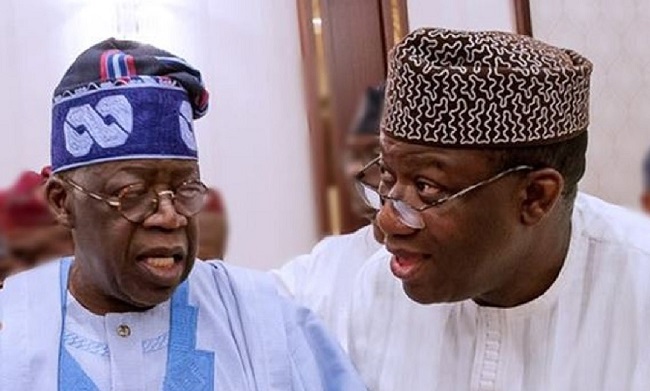 2023: You’re on Your Own, I Have No Alliance With You — Fayemi Tells Tinubu

The Ekiti State governor, Dr Kayode Fayemi has denied media reports that he has struck a deal with a former  Lagos State Governor, Bola Ahmed Tinubu over the 2023 presidential election following a  recent meeting between the two leaders.

Fayemi who had last week met with the national leader of the All Progressives Congress (APC) in Abuja said the engagement with Tinubu had nothing to do with his reported presidential ambition, saying those peddling the rumour were not privy to the issues discussed with the leader and could not have concluded on what transpired.

In a statement signed by his Chief Press Secretary on Saturday, Yinka Oyebode said the meeting only discussed issues of national importance, adding that, ” it is therefore disingenuous of the spin doctors who were no where near the venue of the meeting to begin to second guess discussions at the meeting.”

According to him, the governor has so much respect for the national leader of the APC having been together for years in the course of the nation’s democracy and that the meeting between duo is normal in politics.

He said, “However, both Asiwaju Tinubu’s declared ambition and Fayemi’s undeclared ambition have now been taken up and given verve by some spin doctors, particularly those who believe such could rev up their relevance in the eyes of either of the political leaders.

“What makes the matter worse is that such spin doctors, surreptitiously scrambling for relevance have been weaving, not half truths, but blatant lies into the Tinubu-Fayemi meeting, saying it signposted Dr Fayemi surrendering his undeclared ambition to Asiwaju Tinubu’s declared one.

“Specifically, they have been dishing out barefaced and unsubstantiated lies that Dr Fayemi at the closed door meeting “debunked the raging rumour of his 2023 presidential ambition and pledged support for the national leader of the All Progressives Congress (APC) Asiwaju  Bola Ahmed Tinubu.”

“This, no doubt, is a reckless and untruthful spin. First, since the perpetrators were not present at the meeting and none of the leaders could have divulged what transpired, one wonders from where they got their narrative.

“Secondly, the spin doctors, were so consumed by their fictional hogwash that they could not consider it an impossibility for Fayemi to drop a rumoured, yet undeclared ambition, even when Asiwaju Tinubu said he was still consulting as to whether to run or not.

“The story by the spin doctors thus stands logic in the head and stands not only disclaimed but condemned. It must have been sourced from the rumour mill, or as a beer parlour gist. At its best, it is a mere conjecture.”

The statement explained that even though the governor has not declare to contest the 2023 presidential election, he would only join the race based on his convictions and not to go on unhealthy contest with anyone.

“If and when Dr Fayemi chooses to declare his interest in running for the 2023 presidential ticket, he would not be embarking on an ego trip that would warrant going into unhealthy contest with Asiwaju Tinubu or anyone else. Fayemi sees Tinubu as his leader in politics and reserves respect for him as a national leader of his party. Neither will he run the race with the intention of using it to negotiate with anyone. Rather he will run because he is convinced it is desirable for him to do so.

“Perhaps the spin doctors are unmindful of the fact that Fayemi currently remains focused on finishing strong and well the assignment in his hand as two-term governor of Ekiti State. They also fail to realise that there is still a sitting President equally focused on finishing well his second term in office. Neither Fayemi nor Buhari would like to be distracted by such inanity at this juncture.

“Should Dr Fayemi eventually choose to run in the 2023 Presidential race at all, he would not hide his intention to do so, neither will he involve himself in any clandestine meeting to discuss his chances, since he would have been x-rayed and classified among the preferred aspirants based on his credentials, even before he makes such declaration, ” the statement read.

Former governor of Lagos State, Senator Bola Ahmed Tinubu, on Saturday in Ibadan, Oyo State capital said the outcome of consultations regarding his 2023 presidential ambition has been very successful.

He maintained that he has the confidence and capacity to overcome any form of challenge that may manifest in his bid to succeed President Muhammadu Buhari before and after the presidential election.

Speaking with journalists shortly after paying a visit to the former governor of Oyo State and the Osi Olubadan of Ibadan, Senator Rasheed Ladoja in his Bodija residence, Tinubu declared that “the outcome of my consultation over my presidential ambition is successful.”

According to Tinubu, “the reactions of critical stakeholders to my presidential ambition have been very positive, encouraging and overwhelming and these have spurred me on with the strong conviction that we would succeed and emerge victorious after the election.

“Life itself is a challenge and I have the confidence and capacity to wade through challenges and overcome. We are forging ahead and with the strong support of the masses of Nigerians, we are going to achieve a resounding victory, “he posited.

Though journalists were barred from Tinubu’s meeting with Ladoja, which lasted for more than 30 minutes, insiders informed Sunday Tribune that Tinubu was in the state to commiserate with Governor Seyi Makinde and the people of the state over the demise of Soun of Ogbomoso, Oba Oladunni Oyewumi Ajagungbade, the Olubadan of Ibadan, Oba Saliu Akanmu Adetunji and former governor of Oyo State, Chief Christopher Adebayo Alao Akala.