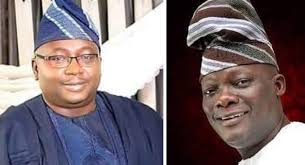 A pa’ni ma yo’da: Violence and the deconstruction of Oyo APC’s real identity By Abubakre Ajao

A pa’ni ma yo’da is Yoruba’s description for a silent killer; a masterful pretender and an individual skilled in subterfuge. This description best fits the All Progressives Congress (APC) in Oyo State, at the apex of which is its governorship candidate, Senator Teslim Folarin and the media spinners he pays, to advance false narratives on a daily basis.

In the last 48 hours, two interesting things happened in Oyo State, which need the insightful dissection of well-meaning residents of the state ahead of the 2023 general election and with a view to deconstructing the true identity of the Oyo APC.

One, the Disciplinary Chairman of the Oyo State Park Management System, Alhaji Mukaila Lamidi, alias Auxiliary, was said to have been arrested and arraigned for allegedly defacing the billboards of the All Progressives Congress (APC). Two, the governorship candidate of the Accord Party and former Deputy Governor of the Central Bank, Mr. Adebayo Adelabu, was said to have been attacked at Tede in Oke-Ogun area of Oyo State.

The two events, though unconnected, have a nexus that Oyo State voters must investigate ahead of the poll. And when they do, it will help to inform the direction they must never look for the coming elections.

While not holding a brief for Auxiliary, the transport unionist, who has, over the years, been a subject of many controversies, it is clear that he is a victim of APC’s orchestrated plan to bring him down due its baseless fear that the incumbent government of ‘Seyi Makinde needs Auxiliary to win re-election. Whatever it is, he will have his day in court and since justice is expected to be served in an unbiased way, everyone will await the judiciary’s decision.

However, though the transporter could be seen in a viral video warning PMS member not to deface any opposition party’s posters/billboards and even going a step ahead to mandate them to be on guard against individuals who might attempt such, billboards will continue to be defaced and the APC will continue to point accusing fingers at Auxiliary. Why? Because their target is actually the PDP and Governor Makinde, so anyone who has a link to those two will be accused of wrongdoing across all fronts by the APC, at least until it comes to the sad reality that blackmail will not win the 2023 governorship election.

For anyone who knows, Oyo APC is a party populated by pathological and systemic liars, unruly and rambunctious political layabouts and individuals who are more violent and more sinful than they accuse others of being. Though there are a few good people, leaders and the led, the Oyo APC as it is presently constituted with Folarin at the head of the ladder, is expert in subterfuge and blackmail and residents of the state must watch what they believe from this quarter.

That is where the second issue about the attack on Oloye Adelabu comes into the picture. A major governorship candidate and its former member, Adelabu claimed he was attacked, but rather than allowing the police to do their job, the Oyo APC had gone to town with a rejoinder that seemed to be bent on completing, though psychologically and politically, the assault, which thugs alleged to be its members started. In that statement that is mostly inhuman, atrocious and disdainful, the Oyo APC, forgetful of how Adelabu had once been its financier, saviour and ‘best thing to happen to humanity after the discovery of electricity,’ harshly described Adelabu “as the most celebrated clown in the current political dispensation as far as Oyo State is concerned.” Haba, what vawulence!

Now, how does a party that is innocent of a crime and wants to absolve itself of blames or violent labels, descend so low to the abyss of shamelessness as to pummel a victim with such violent words? Reminds one of the popular Yoruba saying about omo elefo, a case of a patron calling a vegetable vendor with a view to buying, only for the vendor to retort that his wares were not harvested from the dunghill. Oyo APC’s violent rejoinder speaks to the scriptural saying “by their fruits you shall know them.”

Again, while not holding a brief for Adelabu, a product of the mendacious Oyo APC, who has gone to seek asylum in the Accord Party following the most violent political hijack in the history of party politics in Oyo State, overseen by Folarin, it is also clear that the second weapon APC intends to exploit to retake Oyo State is violence. The reasons for this bold assertion are not far to seek.

For anyone following the sequence of events in Oyo State and watching the pattern of developments within the APC, the weapon of violence is gradually becoming a cherished asset to the opposition party. But as masters in lies and propaganda, they have also perfected the art and act of diverting attention from themselves.

A few examples will suffice to prove the assertion above. Residents of Oyo State, I am certain, have not forgotten the violence that greeted the mercantile approach introduced to party primaries by the APC in 2022.

At the height of the party primaries a few months back, the member representing Iseyin Federal Constituency in the House of Representatives, who was seeking the APC senatorial ticket for Oyo North District, Hon. Shina Abiola Peller, raised the alarm that some thugs tried to kill him. Thankfully, those goons were arrested by the people and they turned out to be individuals with links to the APC. Instead of allowing the police to do its job, Oyo APC’s candidate, Folarin, had tried to divert attention from himself to Governor Makinde, accusing Peller of plans to join the PDP. Today, Peller is in Accord and Folarin has been proved to be a liar.

Secondly, residents of College Crescent, Molete, Felele axis will also not forget May 28, 2022 in a hurry, with the violent clashes of APC gladiators fighting over party tickets nearly turning the area to a war zone. Most blogs in the state reported the event but the Oyo APC looked the other way.

Of course, thousands of residents watched a viral social media video in which APC members desecrated the National Assembly by booing a sitting senator and a brother to the Olubadan, Senator Kola Balogun, with derogatory and unbecoming chants that one would not like to write here. The unruly APC members loyal to Folarin also repeated the same untidy behavior about a week ago, when the Deputy Governor of Oyo State, Barr. Bayo Lawal, represented the governor at the remembrance programme for former Governor Lam Adesina.

There are many cases in point that situate the Oyo APC as the party with a violent antecedents and credentials. Do residents of the state still remember how Folarin brandished a sword at a campaign rally in front of the APC Secretariat in Oke Ado, Ibadan? Yes, they would. Would they still recall how Folarin and his lying APC caravan had gone to town to accuse Auxiliary [read PDP] of attacking APC members during the walk for Bola Tinubu, APC’s presidential candidate, only for the police to discountenance the claim, saying what occurred was a case of robbery and that the victim was not near the APC campaign. Of course, they would. By their fruits, you shall know them!

It was good that Adelabu was truthful enough to tell the world that APC thugs, and not Auxiliary or anyone connected with PDP, attacked him. But he should also own up by telling the world that the attackers were the monsters he built with other APC leaders and left behind while going to Accord or did the violent camp just grow out of the ground?

Of course, I have always questioned how APC pretends to be saintly despite being so sinful, wondering at what point a sinner becomes a saint and at what point the cycle of sanctification of an owl will be complete enough to transform it to a dove? It will be simplistic and outright inane for Oyo APC to think the residents of the state have not seen through its subterfuge and lying audacity, in which it tries to paint everyone else with a coal-tar, when in actual fact, it is the oppressor, the aggressor and the evil party.