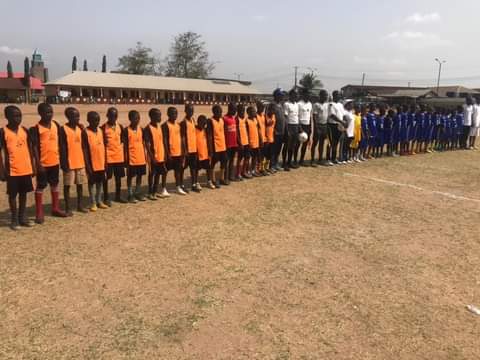 Speaking at the event held at ADS Model Alagbon, Oyo, Sponsor of the tournament, Hon. Isiaka Kazeem Tunde Arole revealed that the main objective of the project was to revive grassroots sports from the primary school level in order to discover talents among Primary School pupils.
He hinted that the competition has become an annual event henceforth.

Cash Prizes, certificates of honour, set of jerseys, and trophies were dished out to Winners, and runners-up of the competition.
The most disciplined team of the tournament goes to ADS Model Balogun , Oyo East, who also finished 4th after losing third place encounter to Baptist Primary School, Ishokun, last Friday.

Other highlights of the event were cultural dance from pupils of ADS Model, Alagbon, and novelty match between members of the National Association of Primary School Games and Sports Teachers, (NAPGAST) and Team Arole which ended in a scoreless stalemate.
A total of 35 primary schools from Oyo East, Oyo West took part in the Competition.