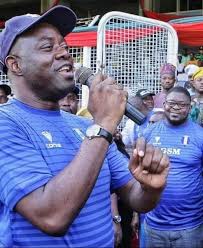 The lawmaker representing Akinyele Constituency 1 at the Oyo State House of Assembly, Hon Ayotunde has commended Oyo State Governor, Engineer Seyi Makinde for his initiatives on sports development in the state.

The commendation was contained in a statement issued by the lawmaker on Thursday in Ibadan.

Fatokun said that Makinde has shown tremendous interest in sports development by not only remodelling the Lekan Salami Sports Stadium at Adamasingba to a world-class edifice but ensuring that Shooting Stars Sports Club of Ibadan (3SC) returns to the top flight of the Nigeria Professional Football League (NPFL).

Our Contingent to National Youths Games Will Surpass…

The Akogun of Abiola Land was full of praises for Governor Makinde’s intention at transforming the sporting facilities to make sports a viable sector, described the remodelled stadium as an attestation that more successes will be recorded in the state sports sector under his leadership and asks that everyone encourages the Governor for him to do more.

“I salute the bold step taken by His Excellency, now we have the stadium In good shape which would result to more sporting events being staged in the country in a better atmosphere and a quality edifice”.

“I celebrate Governor Makinde for his giant strides and I make bold to say that he has delivered his campaign promises for Shooting Stars and I believe he will do more, he has done what others paid lip services on by bringing back our traditional stadium to life.”

3SC’s Promotion: Makinde Has Fulfilled His Campaign Promise on Sports…