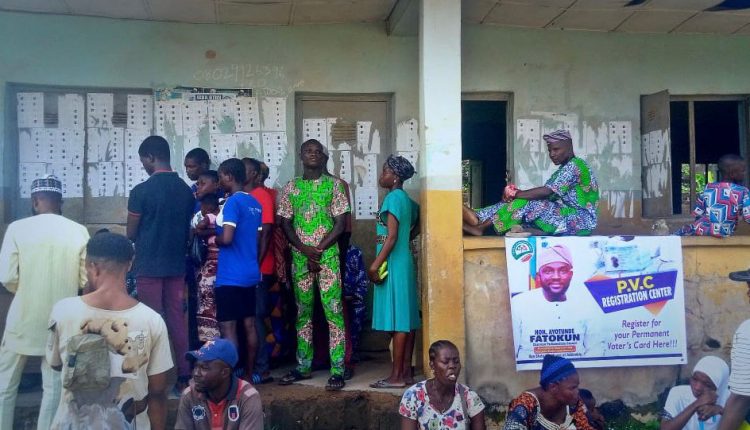 As part of its sensitization programme for residents and eligible voters in Akinyele Local Government to exercise their voting rights, the Lawmaker representing Akinyele Constituency 1 at the Oyo Sate House of Assembly, Hon Ayotunde Fatokun has charged citizens who have attained the age of 18 years since the last exercise in 2018, to participate in the ongoing Independent National Electoral Commission (INEC) Continuous Voters Registration (CVR) exercise.

Fatokun, in a statement made available to pressmen on Saturday after he mobilized some eligible voters to various centres in Akinyele Constituency 1, harped on the importance of the exercise and charged the eligible voters who have not registered to use the opportunity by getting captured on INEC’s database and consequently obtain their Permanent Voter’s Card (PVC).

Fatokun who is the Chairman, Oyo House of Assembly Parliamentary Council, was quoted by GOALPOACHER NEWS as saying, “Citizens should seize the opportunity to obtain their PVCs, so as to be able to exercise their franchise in the run-up to the 2023 General Elections and in subsequent elections.

“I owe it a duty to educate my people of the electoral processes and their rights as citizens, and avoid being influenced by political actors who may want to obtain their voters’ card for financial inducement,” he stated.”

The lawmaker added that the drive he has embarked upon would continue until prospective voters are captured in Akinyele Constituency 1.