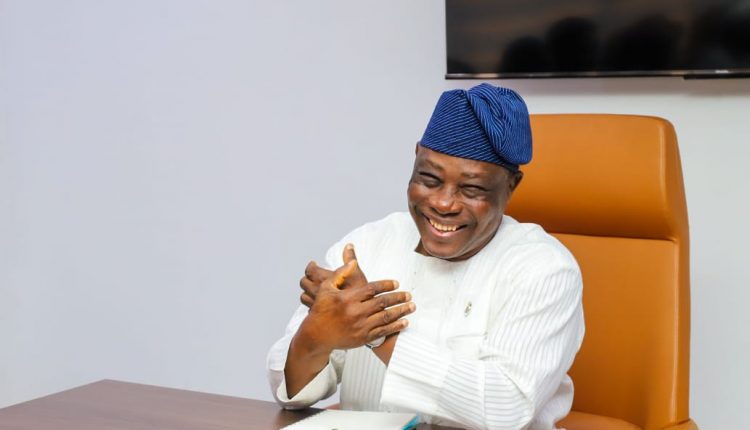 “Big jobs usually go to the men who prove their ability to outgrow small ones.” – Theodore Roosevelt.

A self-made man is someone who managed to make their way in the world and become successful by dint of hard work and dedication. They have the drive to do something with their lives and be positively impactful to humanity. Self-made men want to become something they weren’t born as. They pick themselves up by the bootstraps regardless of adversity and become successful in life. His Excellency, Barrister Adebayo Adeleke Abdul-Raheem Lawal, the Deputy Governor of Oyo state, is an example of a self-made man.

The Kisi-born legal luminary is a gentleman in every sense of the word. Urbane and unassuming, he carries himself with a quiet dignity that is striking. He not only exemplifies humility but personifies it.

He is a fellow whose emergence as the Deputy Governor of Oyo state has brought socio-political calmness in Oke Ogun and the Peoples Democratic Party in the region. His dedication and passion for the development of Oke Ogun have earned him the sobriquet ” The Pride Of Oke Ogun”.

Not that a Son of Oke Ogun had not held the office of the Deputy Governor of Oyo state before. However, his emanation gave a whole lot of meaning to the office, never seen before him. Thus, the people of Oke Ogun rose up to applaud his assumption.

First were the traditional rulers. Upon his announcement as the Deputy Governor of Oyo state, the entire members of the highly- revered Oke Ogun Traditional Council paid him a congratulatory visit, led by the very respected Okere of Saki Oba Khalid Olabisi Oyedepo. This was the first of such a visit by the entire Oke Ogun Council of Obas to any political office holder. One stands to be corrected though. It was the Okere of Saki, Oba Khalid Olabisi Oyedepo, who, while giving his remarks, dubbed Bayo Lawal as the Pride Of Oke Ogun. This was not just because he became the Deputy Governor of Oyo state, but also due to his several positive contributions to the development of the region and the Yoruba race through his extensive and fruitful contributions to Afenifere, a socio- political group that caters to the interests of Oduduwa’s descendants.

The Oke Ogun League of Imams followed suit in paying congratulatory visits to Lawal. Many other socio-political associations in Oke Ogun and across the state also came to congratulate the man many have come to love and respect.

Married to Chief Mrs. Ajibola Lawal and blessed with four lovely daughters and grandchildren, the Bamofin of Kisiland, through patience and divine contentment, is living the life most men can only dream of or imagine.

The Deputy Governor is as affable as they come. Those of us who work closely with him call him “Baba” (father). He is so addressed, not because he is elderly, but because, like every good father, he expresses genuine love and concern for everyone. He treats everyone with respect, love and he is always fair. He often says ” What is fair is Fair”

A closer look at the man Bayo Lawal will reveal three important words about his Excellency. These are Compassion, Persistence and Competence.

Chief Bayo Lawal is truly a kind man. Everyone I have listened to talk about him, speak of his generosity and compassion. I have experienced, and I am still experiencing it personally. He is an empathetic individual who never fails to help people in need.

As a politician and a successful lawyer, Bayo Lawal is a go-getter and a persistent fellow who has the grit to push on in the face of disappointment and setback. Even though he had two unsuccessful attempts at becoming the Senator representing the good people of Oyo North Senatorial district, he never gave up his political hopes. Today, he is the Deputy Governor of the Pacesetter state.

As a technocrat, he always exhibits a high level of competence in every position he has been entrusted with. As a former Attorney-General of Oyo state, between 1999-2003, he left a legacy many still talk about till date. He was appointed as a Board Member of TCTC many years ago. He was also appointed a member of both Oyo State Boundary and Population Committees. He once served as Vice Chairman of Oyo State Judicial Service Commission between 1999 and 2003. he was appointed a member of Body of Benchers and Council of Legal Education of Nigeria. He also served on several panels of inquiries established between 1999 and 2003.

At the Housing Corporation, he shone like a million stars, and just like Benjamin Roosevelt stated “Big jobs usually go to the men who prove their ability to outgrow small ones.”

Bayo Lawal simply outgrew “small job” that was the Housing Corporation. It was in recognition of this and many other laudable acts that he was chosen as the Deputy Governor of Oyo state.

Interestingly, in Oke Ogun and across Oyo state not a single dissenting voice was heard concerning his appointment as Deputy Governor. It was as if everyone in the state was expecting him. Within a month of Lawal’s swearing-in, Governor Seyi Makinde transmitted governance of the state, with all executive powers, to him as he proceeded on vacation, the first time since 2019. Adebayo Abdulraheem Lawal thus became the Acting Governor of Oyo state from 11th August till 2nd September, 2022.

His integrity, honesty, dedication to service and benevolent disposition are attributes that made governor Seyi Makinde placed the Ministry of Justice, Oyo State Road Maintenance Agency and the Oyo state Housing Corporation at the direct supervision of Barrister Adebayo Abdulraheem Lawal, the Pride Oke Ogun.