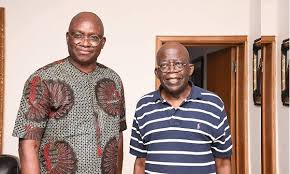 “The chickens are coming home to roost and the unveiling of the mischievous spirits among us will be done in full glare soon.”
These are the words of PDP stalwart and Chairman, Oyo Pacesetters Transport Company, Dare Adeleke, as he reacted to news of the possiblity of moles in the PDP.

In a telephone interview with Paparazzi Press, Adeleke who had in the past insisted that there were some members of the PDP working for APC strongman, Asiwaju Bola Ahmed Tinubu, stated that he has been fully validated at last going by new events that are unfolding.
“Do you remember I once asked the party to check the activities of Ayo Fayose, Deji Doherty and their cohorts, in the crises our party had in the South West? Can you recall that I also cautioned that the main objective of that crises was to destabilize our dear PDP in the South West to enable these so called characters deliver the zone to their Lagos pay master, Bola Tinubu, in 2023?”

“Well, the chickens are finally coming home to roost, in full glare of the public”, Adeleke said.
“At the time”, he stressed further: “Deji Doherty, the illegal Chairman of the party in Lagos, who has just been removed by the court, invited Ayo Fayose, during the run down of the Lagos East Senatorial election, to a political event where Fayose reined curses on Chief Bode George, an act that almost disrupted the whole event.”

“As if that was not enough, the launching of Bola Ahmed Tunubu’s Presidential Campaign group, SWAGA23, was given a boost with Doherty donating his event center for the programme, where the Lagos APC governor, Babatunde Sanwoolu was present.”
Adeleke recalled that he tried to warn the party by calling on the NWC to investigate the “activities of these characters” to no avail.

“Well”, he says: “PDP must shine it’s eye now because we cannot afford to lose sight of the presidency in the 2023. Ayo Fayose is already ahead, being part of the SWAGA23 and evidently, he was one of the first visitors to Asiwaju Tinubu on his return to Nigeria, recently”.

According to Adeleke: “I advise the PDP to shine it’s eye this time and to immediately commence investigation into the activities of the turncoats within our ranks”.