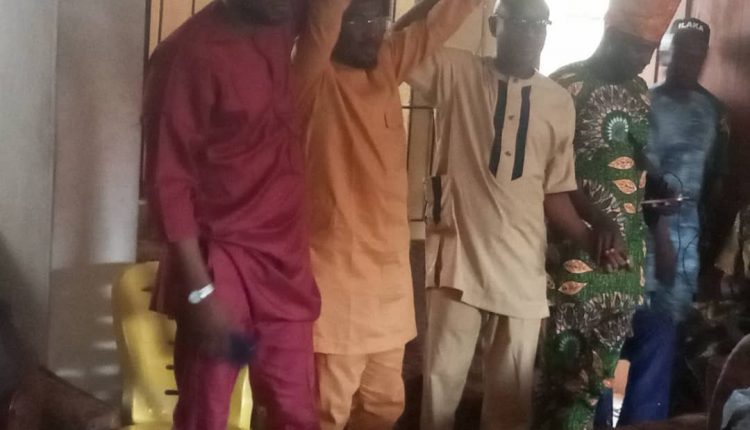 The leadership of the Peoples Democratic Party in Oluyole local government has resolved to adopt Hon Dikko Salami as the party’s consensus candidate for Oluyole state constituency ahead of the primary election slated for Sunday as other aspirants who attended the meeting held this Friday at Ablass Hotel, New Garage, Ibadan, saw other aspirants stepped down their ambitions except Waheed Akintayo who didn’t attend the meeting.

This is the minutes of the leaders meeting as obtained by GOAL POACHER NEWS correspondent.

“Minutes of the Leaders meeting with aspirants. 20th of May, 2022. At Ablas Hotel, New Garage, Ibadan.

“Hon. Ogunrin briefly explained the outcome of the meeting we had yesterday to our leader Hon. Lasun Salami. He explained the reason behind today’s meeting in detail.”

“Our leader, Hon. Lasun Salami gave kudos to everyone for the outcome of yesterday’s meeting. He personally appealed to all the leaders present to please play a role that would lead to the success of selection of our candidates.

He also asked for advice from the leaders present. Before we called on  the aspirants.

Mrs Dupe from ward 2, advised the leaders to tackle the issue of aspirants one by one.

Hon. Lazkaz also enjoyed all the leaders who are one way or the other have one aspirant to play the role of good sportsmanship. He advised that we should be ready to abide by the decision of the Leaders.

Com. Kamorudeen Idowu later referred us to the necessity of what Hon. Lazkaz has just said

Mr Adeolu from ward 9 noted that the meeting was very important but it is too late, because many of this aspirants have spent a lot of money.

Hon. Mrs Sobaloju advised Mr Adeolu not to look deeply into that for us to have unifying candidates.

Hon. Ogunrin later explained the situation to arrive in this situation. He later appeals to anyone in the same situation as Mr Adeolu to please let us follow the decision of our leaders.

“Major Kayode Adeyemo also elaborated on  the need for everyone of us to work together. He commended Mr Adeolu for saying the truth. He also enjoyed the leaders to select among us to address the aspirants.

“Our leader, Hon. Lasun Salami thanked and appreciated  the contributions of everyone who has contributed to this meeting. After which they sent for the aspirants.

The meeting wass adjourned at exactly 1.57pm till 3pm because of Jumat prayer.”

After the introduction of the aspirants, Hon. Lasun Salami briefed all the aspirants the reason for this meeting and the reason they arrived at Zoning the elective posts in Oluyole Local Government.

“That all the leaders have agreed to zoning arrangement of the Oluyole Local Government.
He made his statement clear that the leader of the party in the State Engr. Oluwaseyi Abiodun Makinde has requested from us the candidature of Hon. Mojeed Mogbonjubola Jagaban as the candidate for Federal House of Representative from Idi Ayunre Sector. This is the reason the leadership of Oluyole decided to pick the candidate for State House of Assembly from Olóde sector.

“Hon. Lasun Salami asked all aspirants whether they were in line with the Zoning arrangement, and they all agreed that State Honorable should go to Olóde Sector except Hon. Kemi Obanibasiri who was pleading that she belongs to the two sectors.

“Hon. Moruf Adepoju and Hon. Femi Bamgbola affirmed their total support to any decision made by the leaders.

Hon. Depo Oyedokun appealed to Hon. Kemi Obanibasiri to please accept whatever decision we make on this issue. He gave reasons why this house should arrive on a consensus candidate for the House of Assembly.

“Hon. Ogunrin appealed to the aspirants to please accept whatever the outcome of the meeting from the leaders. He also prayed for the best for all the aspirants.

“Alhaja from ward 10, also appealed to Hon. Kemi Obanibasiri and others to accept the leaders decision.

“The PDP Overall Leader in Oluyole, Hon. Lasun Salami thanked everyone, most especially the aspirants and appealed to the aspirants to work together for the future of Oluyole Local Government. He then asked the aspirants to provide a candidate among themselves. They were given 5 minutes to make the decision.

“After the deliberation among the aspirants, Hon. Kola Oladejo from ward 1 said he had withdrawn his ambition to contest for State House of Assembly Oluyole and support Hon. Ibraheem Oladeji Salami Dikko.

“Hon. Ibraheem Oladeji Salami was unanimously picked as the consensus candidate for the House of Assembly Oluyole State constituency.

“The leader of the party in Oluyole Local Government, Hon. Lasun Salami with other leaders approved the candidacy of Hon. Ibraheem Oladeji Salami Dikko.

The leaders present are :

The leaders prayed for the success of Hon. Ibraheem Oladeji Salami Dikko.