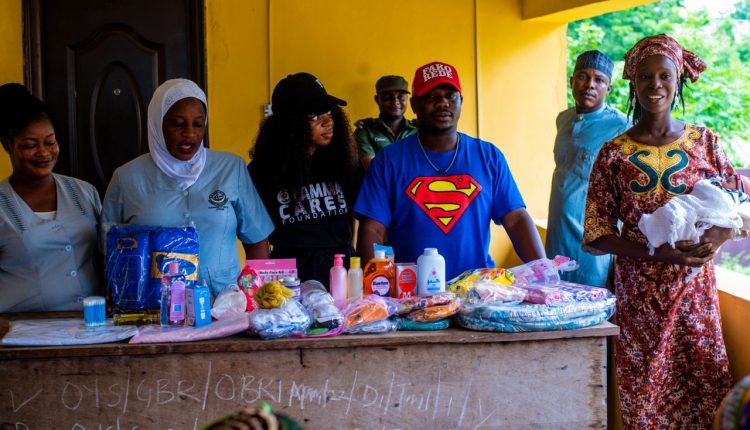 Since 2019 till date Chioma Fakorede (née Nwosu) has continued to raise awareness towards mental health through her NGO, Olamma Cares Foundation.

In commemoration of her birthday this year Chioma visited nursing mothers in Idere and Igboora communities of Ibarapa Central Local Government Oyo State to distribute Mother and Child Care Kits.

Chioma who gave birth to a child four months ago says she understands the joy of motherhood but explains that people barely talk about the struggles mothers face when nursing a new born. She says that statistics show that new mums are at risk of Post Partum Depression/Anxiety/Psychosis. Chioma explained that financial commitment and unavoidable stress of having a child can trigger symptoms.

“Every year for my birthday (since 2019), I host a fundraiser to raise awareness towards Mental Health and give back to my community.

As a new Mum I have had my fair share of the journey and quite blessed to be able to go through it. However, one can only imagine the fate of new Mums in underserved communities who do not have the financial capacity and access to help or support as they navigate this new role.”

Chioma Fakorede who went in company of her husband Engr. Seun Fakorede, MNSE, the Honourable Commissioner for Youth and Sports Oyo State says; “I am grateful to all the donors who contributed in making sure that this charity drive was a success. I am extremely elated knowing that these mothers are happy and some load has been lifted off their shoulders.”