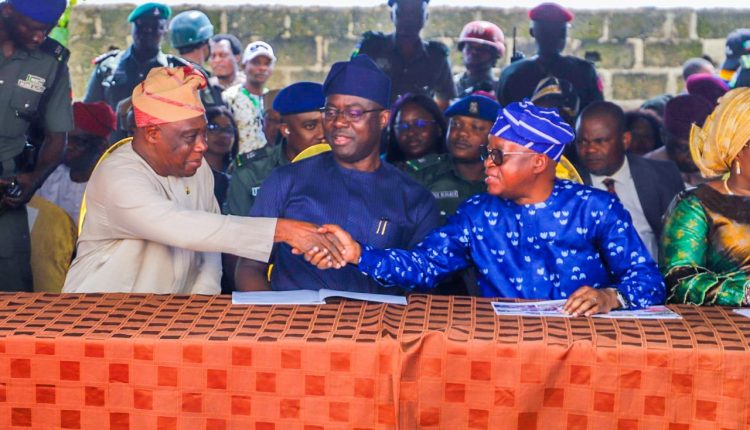 Every Tom, Dick or Harry in Oyo State and beyond knows that Governor Seyi Makinde has never hidden or reserved his admiration for his deputy, Barrister Abdulraheem Adebayo Lawal.

At the Flag-off ceremony of Ibadan-Iwo-Osogbo road held at the capital of Osun State on Thursday, Governor Seyi Makinde described Lawal as his ‘co-pilot and not a spare tyre deputy’.

1) In 2020, at the Flag-off ceremony of 360 housing unit At New  Ajoda Town, Governor Seyi Makinde heaped praises on Bayo Lawal who was the Executive Chairman of Oyo Housing Corporation for having the political will to embark on the legacy project.

2) In 2020, when the Governor hosted the association of Architects at the Conference Room, Governor’s Office, he invited Bayo Lawal to the meeting.  He said, “Here is the chairman of Oyo State Housing Corporation, neither is he an engineer or architect, he is a Barrister.

“He has transformed a moribund corporation to cynosure of all eyes. You can go there to see the transformation going on. We don’t have regret appointing him to that position.”

Governor Seyi Makinde did the unthinkable and what was unprecedented not only in Oyo State but Southwest region.

He transferred his power including his immunity to his new deputy in August 2022 as he embarked on a three-week vacation. On his return to office, he said to his deputy,

“Thank you for your support and loyalty. The people didn’t feel my absence because you acted excellently well. You demonstrated capacity while I was on vacation.

“How I wish I have had you as my deputy earlier but it is better late than never. From second term, I will be going on vacation yearly.”

In October, 2022 during an interview with ace broadcast journalist, Edmund Obilo on Splash FM, Ibadan, Makinde while speaking on Bayo Lawal said,

“Now that I have a supportive Deputy Governor, we can now run where we have been crawling before.”

On 27th October, 2022, in Osogbo at the Flag-off ceremony for reconstruction and rehabilitation of Ibadan-Iwo-Osogbo 91km road,  Makinde introduced Bayo Lawal to Governor Gboyega Oyetola of Osun State when he arrived.  Makinde said, “Your Excellency, this is my deputy. The trio exchanged pleasantries.

While making his remarks at the venue, Makinde described Bayo Lawal as his “co-pilot and not a spare tyre deputy.”