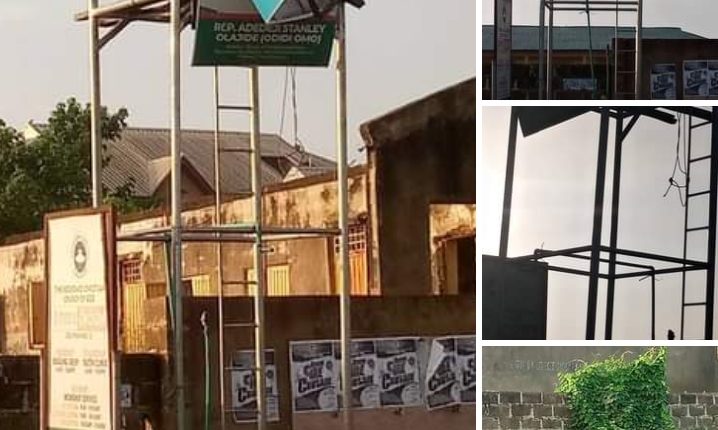 Some residents of Ibadan of Ibadan Southwest Local Government Wednesday accused the All Progressives Congress of sponsoring the destruction of Hon Stanley Olajide Pedro constituency projects cited in three wards.

Some unidentified persons were reported to have pulled down three borehole projects at strategic locations in Ibadan Southwest, one at Agbeni/ Akuru Compound, two others at Oritamerin and Logudu Apata. GOALPOACHER NEWS reliably gathered that Hon Odidiomo had on Sunday donated the sum of two million naira to repair the boreholes.

Investigation conducted by GOALPOACHER NEWS to ascertain what could be responsible for the wanton destruction of projects that have direct impacts on the constituents, some residents of Southwest local government expressed divergent views.

Mukaila from Apata, ward 12 while condemning the act noted that the perpetrators must not go unpunished saying that what could have served the people is what these haters of development have destroyed but thank God our Honourable, the peoples choice is on top of it already.

Also speaking on the dastardly act, Moronkeji claimed that opposition members should be held responsible for the destruction saying that one of the projects was cited at an opposition stronghold. According to him, “I guess the aim of those who sponsored hoodlums that destroyed these projects was to make Odidiomo feel that he has been rejected by his people which is untrue. He is loved by his people.”

Another resident who spoke on condition of anonymity noted that there are mixed reactions on the performance of Hon Odidiomo. He said, “some believed he hasn’t done enough for his people while some are of the opinion that he is one of the most performing federal lawmakers at the 9th National Assembly and that he has done well for his people at the grassroot with some of the lofty projects he has facilitated to the federal constituency. He is a lawmaker not executive governor or chairman.”

“It is indeed reprehensible that the APC, which cannot boast of any development project in their 8 years could be so vicious to sponsor the destruction of water projects meant for the benefit of Ibadan Southwest people, just for political reasons.”

Other residents who spoke with our correspondent unanimously condemned the act, they called on the state government and security agencies to investigate the matter while the perpetrators should be dealt with to serve as deterrent to others going forward.

Effort to get the reaction of Oyo APC Publicity Secretary proved abortive as his number wasn’t available.