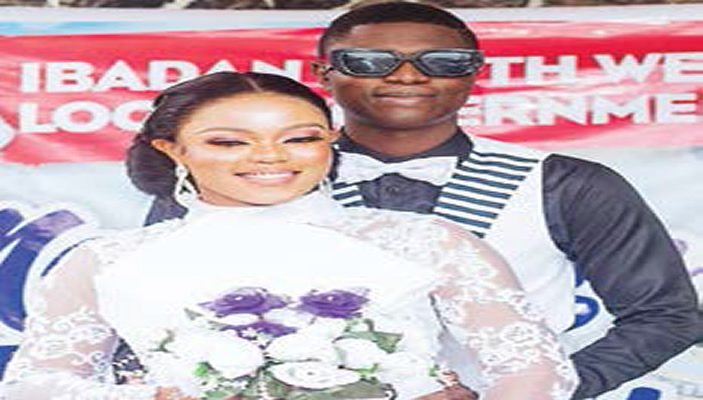 A visually impaired graduate, Demola Adeleke, who recently got married and shared his joy on social media, tells TEMITOPE ADETUNJI  of Punch how he achieve his goals despite losing his sight to glaucoma as a teenager

Can you tell us more about yourself?

I am 29 years old and I am irreligious. I am from Oyo State. I have three siblings, but I am the only son of my parents. I studied Mass Communication at the University of Nigeria, Nsukka.

Why do you not have any interest in religion?

Did you have a normal childhood?

It was normal until I was seven, my first time experiencing a blur. I started going for hospital appointments for my eyes. There were times other kids mocked me for having a bad sight. As a pupil, I had to strain my eyes in class to see some of the things written on the board. It affected my education as well.

Most of the time, I had to copy notes from my classmates and it wasn’t easy. There were times I had to pay them.

When exactly did you lose your sight?

When I was 16, my eyesight went bad and I could hardly see again; I was in secondary school. I had to go to the hospital, and at that time, I had to drop out.

Did the doctors, who attended to you, tell your parents what could be done to restore your sight?

No, glaucoma has no solution. If one has glaucoma, one can only manage the remaining vision they have left. So, I think I didn’t manage it well enough because I was young.

Were drugs recommended for you to take to manage the problem?

Were drugs recommended for you to take to manage the problem?

The eye drop and all that was prescribed, I took them but not regularly the way they were recommended to be taken. So, I think that affected me as well. I didn’t know the dangers of glaucoma, so I did not really pay attention.

What were your parents’ reactions when the problem started?

Well, they did their best. I visited eye clinics and we all believed that I would be fine but over time, we realised that the sight kept degenerating. My mum, especially, was concerned; it went on like that until I finally lost my sight.

What was your educational experience like? How did you manage to read and focus on your studies?

When I was in secondary school, I had to drop out because it was a science school and most of the subjects were quite intensive, I needed to be able to see before I could understand subjects like Biology, Physics, Further Maths, and others. I could not see well. I just managed because I had poor vision, so I couldn’t perform well in all. My strength was in the English Language.

What forms of discrimination did you face?

Some teachers spoke to me in an impolite way and some even insulted me and abused me for not doing this, or for not doing that. At the university, yes there was discrimination but it was from a few lecturers. A lecturer once told me to go and find a blind university; that experience was in my second year. I requested someone to help pen down my answers for a test and the lecturer flared up, telling me that I should have found a blind university to attend instead.

Another one was when I was asking a lecturer a question in an exam hall. We were instructed to draw a diagram, but I could not draw because of my visual challenge. I only asked him if I could just verbalise and explain, but he flared up and shouted at me. Some students too, it is not like they discriminated against me but sometimes when I required help, probably to move from one point to the other, they snubbed me and made me feel like I was less of a human. I had experiences like that.

You mentioned that you dropped out of secondary school. At what point did you go back to complete secondary education before going to university?

It was learnt that after your graduation, you became a teacher with the Oyo State Teaching Service Commission. How did you cope as a teacher?

Well, teaching was possible for me because I can read. I have textbooks. On my computer, I had electronic copies. I just read, then I made notes and I went to class and explained. Sometimes, I get one of the smart pupils to write on the board, while I dictate. So, it’s quite easy.

What did you teach and are you still a teacher?

I taught Literature in English. Currently, I am no longer into teaching.

What do you do currently?

I am studying for my Master’s.

How did you cope with the pupils? Did you encounter any difficulties?

Yes, there were many pupils. I used to teach over 500 pupils from SS1 to SS3, and sometimes one had to go harsh on them before one could get the class under control. Sometime ago, I was taking a class and some of the pupils wanted to take advantage of the fact that their teacher is blind. I had to go strict with them, and eventually they realised that I was a no-nonsense man. Then marking their scripts was a bit challenging, especially the theoretical part. I had to get someone to read out the pupils’ answers before grading and that took a lot of time and energy.

Reports have it that you got married recently. How true is that?

Yes, it is very true.

How did you meet your wife?

I met my wife on social media. My wife and I met on Facebook. She sent me a message requesting that we be friends, and friends we became, and then we both decided to meet physically. Our first meeting went well. Although, according to her, I looked like a masquerade because of my bushy, uncombed hair, which almost put her off. Days after our first meeting, she asked if I thought we could date and though I wasn’t 100 per cent sure if I wanted a committed relationship at the time, I said yes. Within a short while, I realised I had reached my last bus stop relationship-wise.

Did you ever think you would get married soon?

No, but I found my wife and we got married.

What influenced that decision?

We dated for some time and as a man, I needed to settle down, and of course, I love the lady and she loves me too. We had been dating and we realised it was time for us to settle down.

Can you describe the type of person your wife is?

My wife is a very happy person. She is always laughing, and she is very caring and empathic. She is someone I can depend on in any situation if I need something. Generally, she is very compassionate.

Was there a rejection from her family?

What advice do you have for people with disabilities about how to approach things in life?

They should not relax. They should try earning a living by doing something. They should be positive-minded and stop seeing themselves as disabled.

What do you imagine your wife looks like based on the attributes you mentioned?

I have an idea of what my wife looks like because according to my sister, there is a friend of hers who I used to crush on before I completely lost my sight. So, when my sister met my wife for the first time, she reminded me of her friend. She said they look very much alike. So, I have a picture of what my wife looks like. She is fair. She has her cheekbones and she is beautiful.

Were you not surprised when she asked you out since it is not common in this society for women to do that?

I was not surprised that she asked me out because that was not the first time I experienced ladies professing love to me. Yes, it used to be an uncommon thing for a woman to do, but women are walking up to men to ask them out.