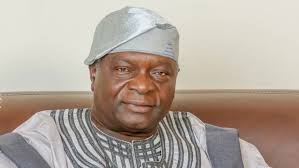 JUST IN : Oyinlola May Emerge As PDP Deputy National Chair •See Other Positions Zoned To S/West

Plans have been concluded by  the leadership of the Peoples Democratic Party in Southwest to present a former Governor of Osun State, Prince Olagunsoye Oyinlola as the consensus candidate for the position of National Deputy Chairman of the PDP for the convention which holds on December 30-31. GOALPOACHER NEWS reports.

GOALPOACHER NEWS quoted the zonal publicity secretary of the Southwest PDP, Chief Santa Atofarati as saying that the party has zoned the positions of the National Publicity Secretary to Ondo-State while Osun-State gets Deputy National Chairman and Lagos-state to produce Deputy National Secretary.

A chieftain of the party from Osun State who spoke with GOALPOACHER NEWS correspondent noted that Oyinlola has been adopted as the next Deputy National Chairman (South). He said, “Chief Oyinlola was a former National Secretary of the party, he has the political experience, he is a unifier and a bridge builder.

” We thank our over all leader in the zone, His Excellency, Governor Seyi Makinde who has been doing everything within his capacity to rebuild the party in the zone.”