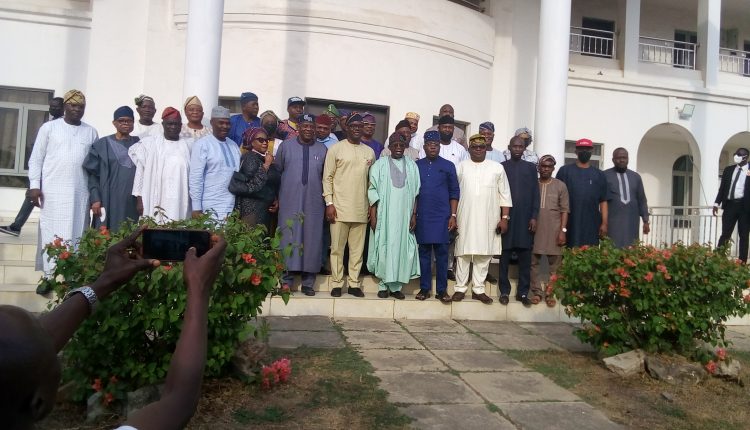 A former Governor of Lagos State, Asiwaju Ahmed Tinubu has commiserated with the Governor of Oyo State, Seyi Makinde on the demise of two first class traditional monarchs, Soun of Ogbomoso, Oba Oladuni Oyewumi, Olubadan of Ibadaland, Oba Saliu Aderunji and the former Governor of the state, Adebayo Alao Akala.

Tinubu who paid a condolence visit to Governor Makinde and the Government of Oyo on Saturday at the Government House, Agodi, Ibadan said he shared the grief of the Governor following the demise of those three prominent personalities. The National Leader of the APC lauded Makinde for demonstrating rare character despite the short notice sent to the Governor.

He noted the late former Governor and the two first class monarchs contributed in no Small measure to the peaceful atmosphere and love in the state.

In his response, Governor Makinde commended the former Governor for the condolence visit. He lauded the courage of Tinubu who deemed it fit to visit the government of Oyo state despite their political differences. Makinde noted that Tinubu has demonstrated that he doesn’t play politics of bitterness.
He, therefore, wished the APC presidential hopeful the best in his future political endeavours.

On the entourage of Bola Tinubu were: Bayo Adelabu, Senator Soji Akanbi, James Faleke among others.