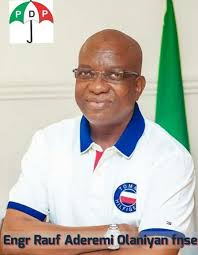 …We Masses Are Behind Makinde – Radio Callers

The Vice Chairman of the All Progressives Congress (APC), Oyo central, Hon Joshua Oyebamiji has revealed to the public that the incumbent Deputy Governor of Oyo State, Engineer Rauf Aderemi Olaniyn would soon defect from the ruling Peoples Democratic Party (PDP) to the opposition party.

Joshua made this known on Saturday while speaking on IBR 92.5 with ace broadcast journalist, Anu Omorinde, monitored by GOAL POACHER NEWS correspondent.

He did confirmed that Governor Seyi Makinde has crowd but does not have the important people around him to make him win in 2023.

Meanwhile, most radio callers on the programme who are mostly elders appreciated Hon Oyebamiji for admitting publicly that the masses are behind Governor Seyi Makinde.