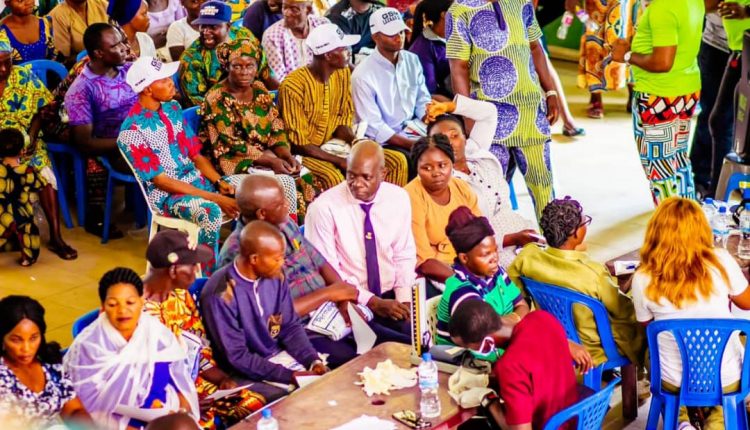 A group of appointees, under the auspices of Young Appointees for Seyi’s Reelection, YASR, on Thursday, took another well-coordinated free medical outreach to the doorsteps of the good people of Ogbomosoland.

The event, which was aimed at complimenting the efforts of the governor in the area of health, held at the Olagbamiosekun Civic Hall, Ogbomoso South Local Government Secretariat, Ogbomoso, and recorded over 1,000 beneficiaries across the five local government areas in the zone.

Speaking during the programme, the Director of Strategy and Programmes of the group, Mr Victor Olojede who is also the Special Assistant to the governor on Students Matters, noted that the outreaches, which the group embarked on so far, has really touched many lives.

He added that the team is happy to be part of Governor Makinde’s efforts aimed at ensuring that dividends of democracy get to people of the grassroots.

He said: “Our team, YASR, will continue to identify with critical stakeholders in the state in order to achieve our major objectives. We are really happy to be part of Governor Seyi Makinde’s efforts aimed at ensuring that dividends of democracy is extended to the people of the grassroots.

“This is not the first outreach we have organised and will not definitely be the last. We have obviously noticed that a lot of people have benefitted so much from the exercise, particularly because it has always been free.”

He also advised other young volunteers to key into the YASR’s mission of activating continuity of good governance in the nooks and crannies of the state.

While also speaking at the event, the Special Assistant to the State Governor on Budget and Economy Planning, Mr. Akanmu Kolawole Elijah, explained that the outreach is another way to identify with the people at the grassroots, adding that it has also availed the team great opportunity to interact with citizens, while having direct feedbacks, which can be helpful during the cause of making government policies.

Akanmu, while saying that the massive turnout was encouraging as it almost doubled the first outreach organized in Ibadan zone, He equally used the opportunity to appreciate the chief of Staff to Governor Seyi Makinde, Otunba Segun Ogunwuyi, for his outstanding effort and support towards the success of the programme in Ogbomoso.

One of the beneficiaries, Mrs Abigael Ibironke, appreciated the team for bringing up the initiative, noting that, it is a good step in the right direction as many people are living with one ailment or the other, which might need urgent attention.

“I am encouraged to see young people coming together to attend to people in the grassroots. Indeed, they have started on a good note, and I am sure that, our people will never forget these efforts. This has shown to us that they are replicating what their principal, Governor Seyi Makinde is doing at the state level,” she stated.

Earlier, during the health talk session, a Nutritionist, Mrs Olurotimi Opeyemi, who advised the beneficiaries, noted that a balanced diet containing the six classes of food should always be considered in the selection of food.

“There is a need for us to take care of our health when it comes to the food and other things we take. Let us ensure that we eat foods that won’t affect our health. Let us also make sure that we don’t take too much of alcoholic content because it can cause kidney and liver diseases,” She said.

The nutritionist, however, warned beneficiaries to stay away from taking cigarettes and too much salt which, according to her, have an adverse effect on kidneys, adding that they should embrace the habit of taking at least 3.7litres of water on a daily basis.

Other beneficiaries, who spoke during the event, appreciated YASR for the free treatment they were opportuned to receive as well as the discoveries about their overall health.

All the beneficiaries were, however, given free drugs and malaria nets.