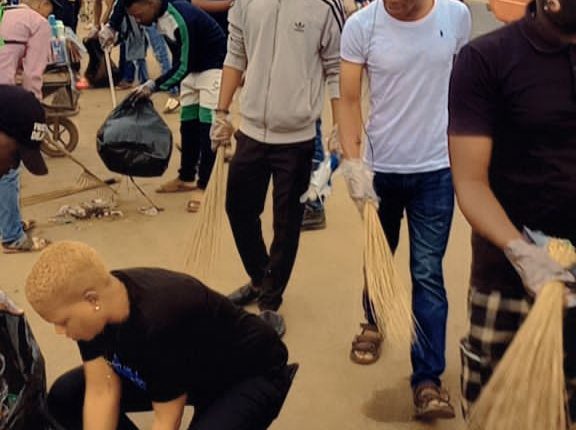 In the early hours of today, volunteers from the 33 Local Government Area of Oyo state under the auspices of Friends of Deji Ola (FOD) gathered in their numbers to engage in a clean-up exercise at major places in Ibadan.

The exercise which stopped at the Oyo State Waste Management Authority Office, Agodi was joined by the representatives of Honourable Commissioner for Environment and Natural Resources, Mr Abiodun Oni.

Speaking during the exercise, Mr Deji Ola who is also the Personal Assistant to Governor Seyi Makinde’s Chief of staff, expressed his gratitude to the volunteers for their contribution to the creation of an environmental friendly atmosphere in the Pacesetter State.

He emphasized the importance of sanitation in our community noting that ‘cleanliness is next to godliness’. He further stated that, his team will continue to complement the good work of Oyo State Government. While appreciating all critical stakeholders for the role they took to ensure that the activity was perfect, he revealed that the group contributes to the development of the community through many other initiatives and stated that, in few months time, the NGO will be organizing massive environmental awareness rally to sensitize the good people of Oyo State on importance of cleanliness and hygiene practice.

Mrs Adesina who represented the Honourable Commissioner for Environment and Natural Resources appreciated members of the NGO for their genuine effort to facilitate such massive sanitation exercise. He equally charged them to continue to do their best as rewards for goodness is coming in earnest.

A teacher, Mr Yusuff Gboyega during his remarks, commended all volunteers from all walks of life and also stated that, the monthly activity has become their usual routines which is giving them joy, especially the feedback filtering from the populace.

A commuter- Mr Nurudeen laud members of the NGO for the wonderful initiative, noting that it will further show to the world that, Oyo state is blessed with useful and patriotic youths.

Oyo South APC Senatorial Candidate, Alli visits family of man who died while searching for place to register for PVC