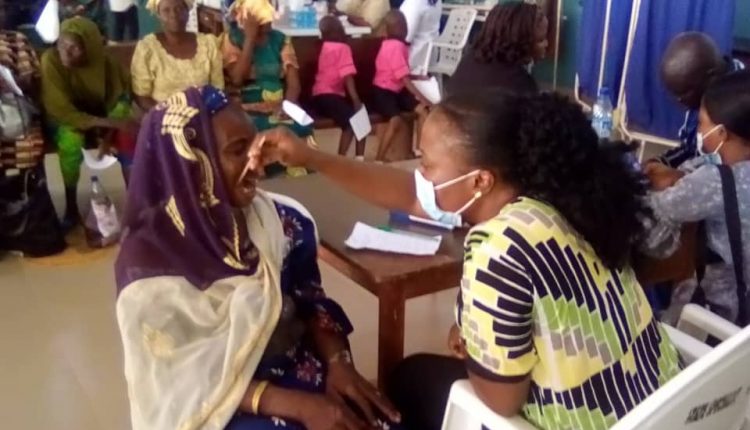 About Four Hundred Thousand residents of Oyo state have benefited from the State’s free medical treatment under the campaign tagged ” Omituntun Free Health Mission ” with required follow up for concerned individuals during the previous medical treatments done across the 33 local government areas of the state.
The number of cases of anemia   attended to by the medical team in the local governments covered so far in the current campaign has  been reduced by 25 percent .

The Director of Secondary Health Care , Ministry of Health , Dr Wale Falana, disclosed this on Monday during the third phase of 2022 Omituntun Free Health Mission which took place at State Specialist Hospital , Saki .
The Director, who doubled  as the Coordinator of the free health mission, said the outreach has  assisted in improving the health status of residents of the state significantly,  following the adoption of a quarterly  campaign .

He explained that the ongoing medical outreach also covers all the treatments offered in the previous ones which include surgery , dental consultation and treatment , distribution of glasses and drugs , medical examination and counselling amongst others .
He hinted that about 43,000 people have been treated since the commencement of the current phase, adding that the projection of the state government is to exceed its last coverage at the end of the outreach.

” We thank Almighty God and   our Governor for having the free medical mission quarterly.
” A lot of people have benefited from  the program, we are having healthier residents in the state .
” From what we have seen so far in the last five days , we have treated about 43,000 patients . We find out that anemia is gradually reducing , it has reduced by 25 to 30 percent .

” We had 400, 000 beneficiaries including the previous and new ones because it is a 3 month exercise . Those who are on anti-
hypertensive and diabetic drugs were placed in hospitals after the exercise, we see them regularly , we gave them their drugs , so , the new and old beneficiaries were been taking care of and like we have started again , we have been taking care of the old and present especially in surgery .

” We are also  attending to communicable and non communicable diseases . For  our projection , we are looking to have a figure more than the previous ones”
Speaking on behalf of the beneficiaries , Azeez Wuraola Zainab, Alimotul -Sadiat Abdul – Azeez and Akin Adigun expressed satisfaction over the medical mission and approach of the medical personnel .

Azeez Zainab , who commended the state government  for the gesture , appealed to the medical team to work on timing to increase the number of beneficiaries of the program .

20th Reunion: Class of 2002 Command Secondary School set to give back to alma mater

How Ikpeazu, Ortom ‘suffered’ for their loyalty – Wike