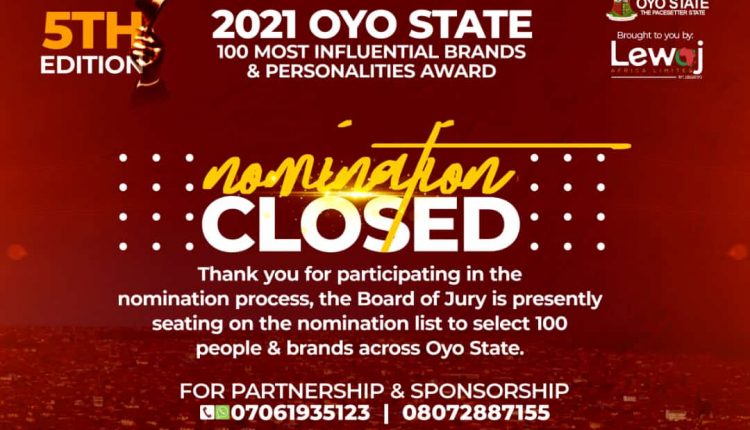 OYO STATE MAN OF THE YEAR AWARD: NO AUTOMATIC WINS FOR ANY CONTESTANTS – ORGANIZER

The organizer of the most expected OYO STATE MAN OF THE YEAR AWARD, Lewaj Africa Limited, has debunked the rumor going around the town that, a particular person among the nominees will automatically be crowned and take enthronement as the 2021 Oyo State Man of the Year, even if he did not win the contest.

The organizer, through the project coordinator, Amb. Ayo George has denied this claim, saying it can never happen in this type of award, anybody among the nominees can win and only be crowned if voted for by his loyal supporters and fans.

“It has come to our notice about the rumor going around that a particular person will be favored and will automatically be given “the enthronement seat” as the “2021 Oyo State Man of Year”, and this is the reason why some nominees are not participating in the voting process.

“I will like to inform the general public that this claim is false, 20 people were nominated and all of them were fully aware of their nomination because we tried our possible best to send the notification of nomination to all the nominees, some before the voting kick-started and some immediately after we started the voting, due to difficulties we encountered in reaching out to some of them. All the people nominated are all personalities of integrity and none of them, I believe will want to accept such in the first place if the voting results are not in their favor.

“Let me also remind the general public, especially those that have visited the voting portal, this voting portal is being managed by a consultant, a respectable online payment gateway, named WATU. So, it’s going to be very difficult for anybody to alter the voting results because it is very open on the platform, anybody can see who is leading or who eventually wins at the end of the voting process.

“In fact, I am even surprised that some people still don’t have a single vote as at now and that now raised so many questions. Firstly, does it mean they don’t really have influence as so many people think, or their fans are only showing them fake love?

“Well, I have come to realize that, never assume people like you, work more to earn people’s loyalty, if you need the outcome; put in the work, and finally, you need actual influence to make headway in life, and increase your social currency.

“The winners for the 2 categories, the man of the year will take “Enthronement”, and for the youth of the year will be announced as the “King of Boys”. Also, the unveiling of the 2021 Oyo State 100 Most Influential Personalities and Brands will all take place, together on Sunday, 30th of January, 2022, at Manhattan Hall, Cruzer’s place, Jericho, Ibadan.