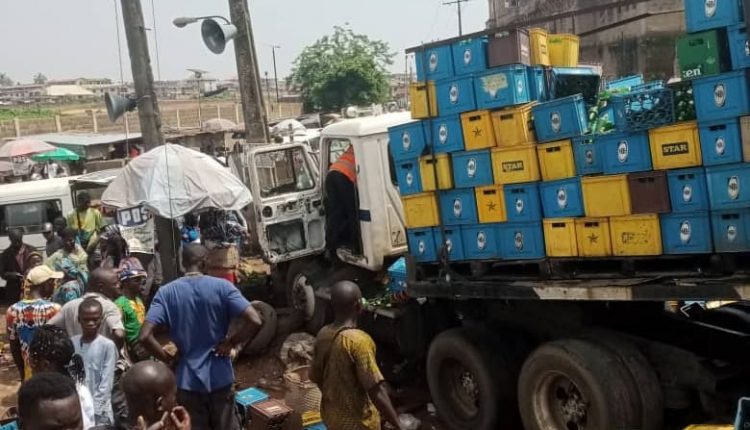 A Road Traffic Accident has just been reported at FRSC out-post, opposite Toun Hospital, along Wema Bank, Iwo Road, Ibadan by 1130hours (11:30am)

Our men and Officers manning Egbeda/ Tollgate Commands and other sister agencies are at the scene to rescue affected persons and ensure free flow of movement whilst efforts are on to evacuate the affected articulated vehicle conveying some bottles of drinks.

As at the time of filing this report, no casualty was reported and wounded persons had since been moved to a nearby hospital by the OYRTMA Rescue Team who are also on the process of removing the vehicle.

While traffic along the route is moving slowly at this hour, we beseech motorists plying the axis to drive slowly and carefully pending when the crashed vehicles would be completely removed.

In his reaction, our Executive Chairman, Mogaji Akin Fagbemi has further reiterated the call for traders to desist from selling or displaying their goods and commodities just beside the road corridors as this act poses a significant risk to their lives and properties. He implored business owners to respect the roads and avoid any sort of encroachment so as to avert calamities of monumental proportions in the rare event of an accident such as this.