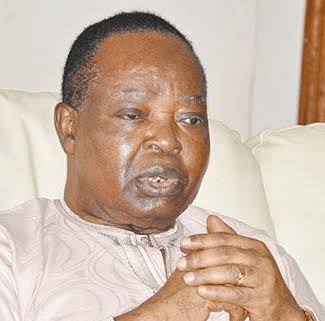 Wayas died in London after a brief illness at the age of 80.

Ayu, who was Senate President in the botched Third Republic, described the late Wayas as a quintessential democrat who left bold prints on the politics and political history of Nigeria.

In a statement from the Dr. Iyorchia Ayu Media Office, Maitama, Abuja, the former Senate President recalled the role the late Wayas played during the Second Republic.
According to Ayu, “Wayas brought stability, colour, style and depth to his leadership of the National Assembly.

“I join millions of Nigerians across different strata of life mourning the passing of this great Nigerian statesman. He dedicated his life to the service of his Fatherland.

“He was a great man, a quintessential democrat and an outstanding statesman who has left very bold prints both on the politics and political history of Nigeria.

“As Senate President in the Second Republic, he brought stability, style and depth to his leadership of the National Assembly at the time.

“Even after the collapse of the Second Republic, Wayas continued to be a stabilizing force. We recall his work as a statesman at the 1994 Constitutional Conference.

“I wish to convey my heartfelt condolences to his family, the people and government of Cross River State as well as the Federal Government of Nigeria.”

While regretting that Nigeria will miss Wayas’ fatherly advice, Ayu prayed for God to grant him eternal rest and give his family the fortitude to bear the irreparable loss.