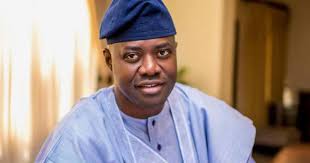 Following public outcry over the bad state of local roads in Oyo State, Governor Seyi Makinde has mandated all the local government Chairmen in the State to submit the list of roads to be rehabilitated or constructed in their domain.

The State Commissioner for Information and Culture, Dr Wasiu Olatunbosun disclosed this today while fielding questions from Aanuoluwapo Omorinde on BOTTOM LINE – a political programme on IBR 92.5fm Ibadan.
When informed about the series of complains from residents of Ibadan about the poor state of roads in the interlands, Olatunbosun said the Governor has directed that something be done about it.

“the information I have is that His Excellency has directed that the Chairmen compile the list of roads to be rehabilitated and submit it. Once that is done, work will commence”.
Reacting to a caller on the programme who expressed worry about the investment of the State government on motor parks, the former local government Chairman said “data has shown that the totality of those who fly aeroplane in Nigeria daily is about forty two thousand whereas, the number of those who make use of motor parks daily in the State is fifty five thousand hence, the need for the government to invest in it”.

On what the government is doing to sanitize the transport sector in the state, Olatunbosun made reference to the commitment of the Chairman, Disciplinary Committee of the Park Management System wherein he asked the public to report any member of the establishment that may behave in an unruly manner.

He said the government will continue to serve the people in line with the four pillars of the roadmap to accelerated development which the governor campaigned with.