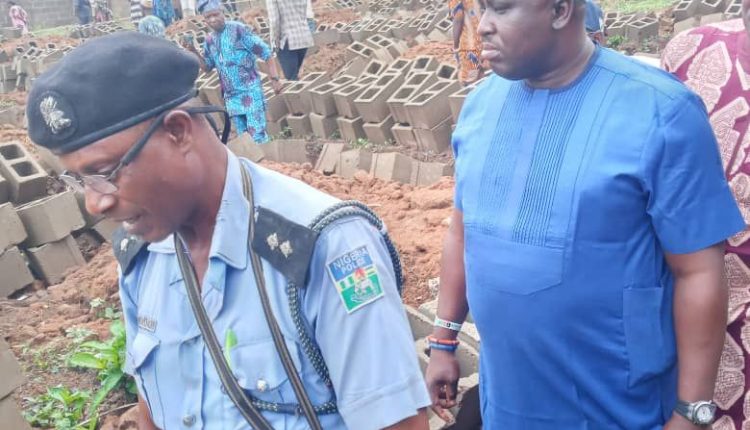 Oloye Akika Speaking at the event said, “I thank God for giving us the grace to be alive to fulfill a promise to our community, Community without security of lives and Property hardly develop, this project is inline with Governor Seyi Makinde’s Administration of securing the lives and properties of the State, I’ve toe the line to help the State in attaining that great feet.

Speaking at the event, Oloye Akika Said, “I want to use this opportunity to thank my wife Chief Mrs Bidemi Akika, The Yeye Agba-Akin for being the pillar behind my back, He appreciates Otunba Seye Famojuro for his continuous support, also he thank Mr Olalekan Mojeed for being a reliable and dependable shoulders to lean on over the years, While appreciating Omi-tuntun Benedict Forum for always being the reasons and the drive to do more.

Speaking at the groundbreaking ceremony Barr. Babatunde Tijani (Double T) who represented the governor said, “Security is one of the four cardinal pillars of Governor Seyi Makinde’s Administration, today an individual has taken it upon himself to build a police station for a community as big as Olorunda Abaa, if everyone can help with such developmental Strides, without waiting for the government,it will help to secure our lives and properties. I now can understand why he was installed as the Agba-Akin of Olorunda Abaa.

Barr. Babatunde Tijani (Double T) call on well meaningful Oyo State residents to follow suits as this will help curtail the menace of the evildoers.

The Oba of Olorunda, Oba Samuel Oludele Folarin said, its has been a long process, as a community we’ve been on this since 2013, after securing the land, the carteker Chairman then, now the Executive Chairman help us with the grading, all we could do was just sell an old transformer, before we could start the fencing, we could not even take the project beyond the first 3 couch.

Speaking further the monarch said, “Chief Benedict Akika has been a blessing to our community over the years, it has been from one project’s to another, even the professional politicians cannot match his strides when it comes to the value this man has added to our community, today my joy know no bounds. He has promised to give us a befitting police station within the shortest period of time.”

“Work has fully begin and all we can do is to appreciate his kind gesture and pray to God to bless him abundantly.

Hon. Kazeem Adeyemi Gbadamosi speaking at the event said, “I was the caretaker Chairman, when I was called upon to grade this place, today I’m glad to be here as the Executive Chairman of Lagelu Local government joining in the Sod turning of this Police Station Project. While also commending Chief Benedict Akika, for his benevolence in embacking on a project as huge as this, while promising to support in any area the council can when call upon.