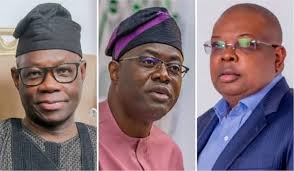 Religon and politics are two of the hardest things to talk about, yet they mean so much to us, since the dawn of time, warring combatants have regularly reached for what support they could find to nerve their own side for battle.

Religion shouldn’t be where a non-performing Senator should use as a coverage for his weakness. It is on record that Senator Kola Balogun benefitted from where he didn’t work for, the ticket he used was for Chief Mikail Adebayo Lawal, Governor Seyi Makinde appealed to Chief Lawal to allow Senator Balogun to use the ticket. Nobody cried foul then.

Historical touch of Oyo South Senatorial District says, no sitting Senator has ever returned to the Red chamber, it is on this premise that Oyo State PDP with her leaders considered a worthy chieftain, a Mogaji of Ibadan land as the candidate of Oyo South Senatorial District for PDP. Chief Tegbe wasn’t consider because of religion but widely chosen because he is the best choice for Oyo PDP.

The premium should be placed on the failure of Senator Kola Balogun because three of our House of Representatives members performed beyond him. The record of office he shortlisted is not different from what many of the State Honourables in the state has done.Two of the three Federal Honourable returned are Muslims, Honourable Dhikirulah Adedeji Odidi-Omo, Honourable Abass Adigun Agboworin. It is evident that they returned as consensus because they performed very well.

Even before Governor Makinde became the governor of the state, he didn’t build church but a mosque, he started the mosque building in 2013 and completed it in 2014 and Alhaji Lanase since 2014 has been the Imam of Omi-tuntun mosque. As of that time, the three closest aides of Governor Makinde were all Muslims, Alhaji Akeem Azeez, who is now the Personal Assistant to Governor, Alhaji Wasiu Adeleke who is now the State Secretary, Oyo PDP and Alhaji Ramoni Adepoju, the executive chairman of Ibadan North West Local Government.

Governor Makinde has been serving the good people of Oyo State with fairness and the fear of God, irrespective of religion, and he loves both Muslims and Christians as well as the traditionalists. Instead of a sitting Senator to shun every form of divisiveness in religious practice so as to allow the state and the country to attain her potential in every facet of life, he asked a group who is unknown to share myopic view into political affairs.

It is also on record that before Governor Makinde became the governor he has been having relationship with Islamic leaders and Islamic affairs, The Aare Musulumi of Yoruba Land, Alhaji Daud Akinola, League of Imams and Alfas, Muslim Association of Nigeria and NASFAT where he tabled before them his blueprint for governing Oyo State which was well received.It is on this note we call on any group with nefarious activities to stop mixing religion with politics. Instead, they should commend the effort of a leader, Governor Makinde who has been addressing grinding poverty which doesn’t recognise anyone based on religious leanings in Oyo State.