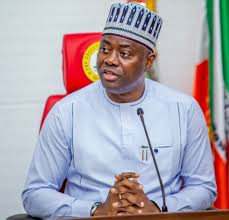 Re:OYO 101: Makinde And The Revolt of The Youth By Kazeem Bolarinwa

It is that season again when every naysayer suddenly has an opinion of how government runs and how the benefit of its policies to the citizenry should be harnessed. Hinged on this fact, many of them slumbering in myopic hallucinations begin to make conjectures and articulations shrouded in unfathomable misgivings and obviously faulty premises. Little wonder the public space is now saturated with sponsored articles and distastefully preconceived biased opinions from political jobbers to discredit the current administration in Oyo state led by Governor Oluseyi Makinde.

Notwithstanding the charged political atmosphere even as 2023 general elections draw closer, the truth is always the truth and no amount of volcanic disruption in forms of orchestrated falsehood or alteration can possibly sink the truth, hence the age long aphorism that “facts are sacred” and should be treated as such.

Bothered by the need to accentuate these facts as against clouding the political atmosphere with presumable cacophony primarily motivated to score cheap political goals, I have decided to respond to issues raised in this article todissuade the minds of keen observers and every open minded reader who is rather interestedin the true state of things.

For the avoidance of doubt, Dr Debo Akande is not only an expert in the nation’s agriculture sector, he is a superb administrator with a vibrant youthful finesse who would rather provide answers and clarity to the processes of the state YEAP, or allow the toothless dogs to keep barking.

For this reason, I do like to excuse myself from explaining the technicalities involve in the process of the state YEAP. However, it is only pertinent to counsel this writer that instead of spinning fabrications, Dr. Debo Akande runs an open office and would readily acquaint necessary details of how the YEAP initiative runs in the state.

More seriously, if not plagued by sheer prejudice to make such spurious claims in this writeup, how would one conclude that youths are in revolt against Governor SeyiMakinde because of YEAP initiative? Obviously seems like picking a little piece to draw shaky conclusion without any sense of logic. This in all sense of it, is fallacious and overtly reflect a jaundice view even in the face of overwhelming facts that has decorated the achievements of Governor Seyi Makinde in youth empowerment in the state

Initially agreeing with the facts, the writer had affirmed to Governor Makinde’s ebullient relationship with the state youths’ community as a youthful Governor who continued to foster cordiality with the youths in his introduction before surprisingly veering off tangent by doing the job of his political paymaster.

For the sake of emphasis, In the history of Oyo State, a Governor as passionate and empathetic as His Excellency, with an administration hugely interested in the affairs of the Youths like Governor of Oyo State, Oluseyi Makinde.

Conscious of the fact that youths can wield power depending on the weapon they are provided with, supposedly birthed Governor Oluseyi Makinde unquenchable thirst for Youth Inclusion and active participation. Premising on this, the Government became a model to others with the appointments of vibrant and smart youths as Commissioners, Senior Special Assistants, Special Advisers, Special Assistants and chairmen of Agencies and Boards. These Political appointees have also in turn lived up to their youthful strength and prowess with the support of His Excellency by carrying out several empowerment programmes.

Before the administration, it had been years before recruitment of any sort was done but since year 2019, we have had massive merited and transparent recruitments like Oyo State Hospital Management Board (OYHMB), Oyo State Post Primary Schools Teaching Service Commission (TESCOM), Civil Service Commission, Oyo State Health Insurance Agency (OYSHIA) Western Nigeria Security Network (WNSN) codenamed Amotekun and many more. It is worthy to note that a huge percentage of the beneficiaries of the recruitments are youths. The Governor has paid extra attention to the youths thereby creating empowerment programs for both the formally and informally educated.

The Agency for Youth Development, Oyo State has trained and empowered several youths:

2,246 youths were engaged in public workfare under the Youth Employment Social and Support Operation (YESSO)

1404 beneficiaries of Labour intensive Works under NG- cares were placed on monthly stipends since June 2022.

In partnership with the National Directorate of employment, several youths have also been empowered.

The lucky beneficiaries are indeed thankful to His Excellency for such job creations.

His Excellency’s infinite thirst for youth consideration and job creation also made him empower several youths across the 33 Local Governments Areas of Oyo State. Hence, it is important to note that YEAP is just a fraction of empowerment and not its entirety.

It is also noteworthy to stress that these achievements enumerated above were mainly under the state agency for youths development. Most Ministries, Departments and Agencies (MDAs) have robust social welfare schemes that usually factor the youths population.

Most of the youth empowerment programmes were geared towards;

Youth in Agricultural Business for youths who are interested in agricultural business such as snailery, bee keeping, fisheries, poultry production etc. are trained, placed on internship and equipped with starter packs.

Short-Term Intensive Skills Training organised to develop small and medium scale enterprise as a strong strategy to combat poverty and hunger. Youths were trained and empowered with equipment for economic self-reliance in ICT, fashion designing, vulcanizing and photography.

Expenses on Federation of Boys’ and Girls’ Clubs programme designed to channel the energy of young people towards positive and productive use. It is also channel towards physical development and talent discovery.

Launching, establishment, training and graduation of 345 out-of-school youths who were mostly artisans in 5 centres under a literacy programme tagged “OYO NISE, OYO LEKO.”

Knowing fully well that youths are the highest participants and beneficiaries in the sporting activities, Governor Seyi Makinde desirous of impactful youths engagement concentrated in the remodelling and establishment of sporting facilities across the state

In this regard, the upgrade and construction of the following sports centres/facilities comes to mind

Agreed that the current administration rested its policy thrust on four pillars of health, security, education and economic expansion through agriculture but Governor Makinde’s midas touch cut across all sub sector of the state economy. The youths being aware of these great feats have risen beyond the parochial postulations of this writer and are now even more poised to champion the new vision for reengineering Oyo state entitled Omituntun 2.0

It is from this stance of unequivocal conviction, that I say that Governor Seyi Makinde’s second term victory has been cast in IRON, simply because the energy behind the drive is youthful and the unmatched results of his achievements would provide elixir for Makinde to coast to victory.

Kazeem Bolarinwa is the Special Assistant to Governor Seyi Makinde on Youth and Sports.

Re: OYO 101: Makinde And The Revolt of The Youth By Victor Olojede