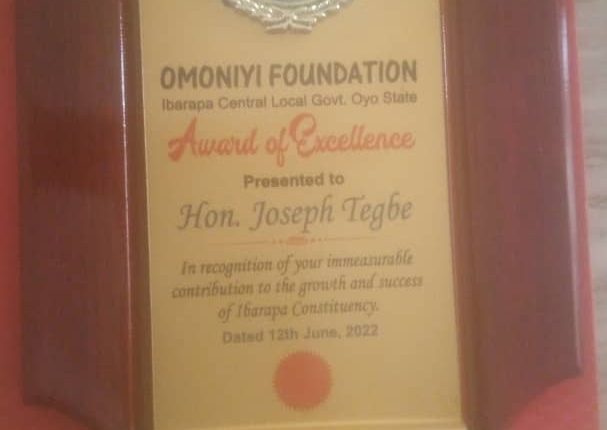 Tegbe Honoured In Ibarapa As Thousands Of APC, Muraina’s Supporters Defect To PDP

The PDP Senatorial candidate for Oyo South Senatorial District Mogaji Joseph Olasunkanmi Tegbe has received an Award of Excellence from Omoniyi Foundation in recognition of his support for the growth of Ibarapa land and development of her people.

The award was presented at Idere where a leading House of Assembly aspirant in Ibarapa Central Area of Oyo state and Mrs Yetunde Wuraola, SA media in the Government of Governor Ajimobi led over a thousand supporters to dump the All Progressives Congress for the Peoples Democratic Party.

Ibikunle, a philanthropist stated that the decision to join PDP was driven by the need to support the ambition of Mogaji Joseph Olasunkanmi Tegbe, and also complement the effort of Gov Seyi Makinde.

Similarly, some aggrieved PDP members loyal to Hon. Muraina Ajibola have dumped him to reunite with the PDP.

Whil recieving the decampees on behalf of the Governor, Hon. Akeem Ademola Ige congratulated them for their decision to pitch tent with the PDP, the only party that can satisfy the yearnings of Nigerians for good governance and give better life for all. He stated that Governor Seyi Makinde has proven in the last three years beyond reasonable doubt that good governance is possible if the electorates can elect leaders that genuinely have the interest of the people at heart in the position of authority, adding that Makinde’s administration has become a yardstick for Nigerians to make a choice as 2023 general election approaches.

Speaking on behalf of Ambassador Arapaja, Ige assured both new entrants and old members of equal opportunities as PDP is a fair and disciplined party that doesn’t discriminate but rewards hard work and loyalty accordingly.

Others who spoke at the event include Mogaji Joseph Tegbe, Hon. Anthony Adepoju, Mrs Funmilayo Orisadeyi, Hon. Seun Fakorede and the party Chairman in Ibarapa central local government, Mr Gbade Akinlolu lauded Bosun Ibikunle and his supporters for taking the right step, stressing that the APC has dissapointed Nigerians and it has become a desert wherein every right thinking Nigerian is leaving to find solace in the PDP. They expressed optimism that others who equally felt cheated in APC will soon join the PDP in Oyo State.

Speaking with journalists at the event, Hon. Bosun Ibikunle said he and his supporters left the APC because they were deceived and cheated by
the party leaders in Ibarapa central and Ibarapa North federal constituency when they refused to give him the ticket to contest for the State House of Assembly election in 2023 without considering the fact that he had been a major financier of the party since 2019 in the said federal constituency.

He added that all his supporters directed him to decamp to the PDP with assurance to follow him en mass because only PDP will give them sense of belonging and youth participation in the scheme of things.

Leaders of the aggrieved members that reunited with the PDP include Pa Busari Tajudeen Vitalo, Pa Babarinde Adejare and Pa Okewole Okeniyi.

Report that Arapaja, Others Should be Investigated…