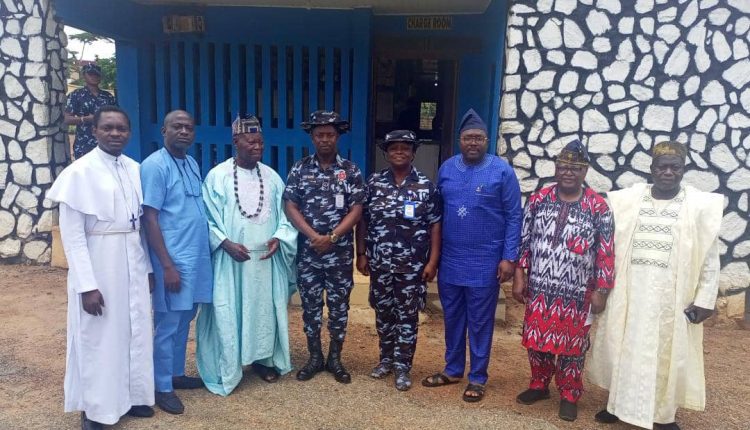 The Executive Governor of Oyo State, Engr Seyi Makinde has assured the Nigeria Police Force and members of the Bodija Community that his administration will continue to strengthen working relationships aimed at promoting security of lives and properties.

While speaking on behalf of the Governor, his Executive Assistant on Administration, who also pastors one of the churches in Bodija, Idowu Ogedengbe, appreciated the new Area Commander of the Bodija Housing Division, ACP Taiwo Kasumu PhD, for embarking on a familiarisation tour of duty to the community.

He also commended the Divisional Police Officer of the Bodija Housing Division, CSP Uduak Edet for her exceptional performance since her posting to the division. According to him, despite the increasing commercial and entertainment activities in the area, the spate of crimes has significantly been reduced. The combined effort of the State in lighting up the environment under the Light Up Oyo Project as well as the provision of appropriate surveillance, especially at night has ensured that criminal elements don’t find the area conducive for their operations.

He also commended the improved relationship between the men of the Nigerian Police Force and the Western Nigeria Security Network in ensuring that there is safety of lives and properties in Oyo State.

While stating that two additional centres for the registration of Motorcycles, popularly known as Okadas, used for commercial businesses, have been identified within the Bodija area in order to fastrack their registration, an exercise which has recorded the capturing of about 6000 motorcycles in the Government database.

He implored religious leaders and traditional rulers, neighborhood association as well as other members of the community in attendance at the meeting to assist in the dissemination of the information to riders in order for them to get registered if they are yet to do so. He stated that the reason that the Government under Engineer Seyi Makinde decided to take this route in addressing the security challenges posed through the use of Okada is because banning it outrightly would further worsen the unemployment rates and heighten insecurities in the State.

He stated that that the Oyo State Government will continue to support the various security agencies, as it has been doing before now while noting that the hall of the Police Community Relations Committee in Agodi was completed through the support of the State Government.