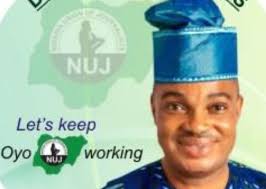 Leaders of the Nigeria Union of Journalists (NUJ) across the six States in the Southwest otherwise called Zone B, have lauded the significant progress recorded in recent time by the Ademola Babalola-led Executives of the Union in Oyo State.

The Leaders who could not hide their feelings during the weekend’s Zone B meeting of the Union hosted by the Osun State Council took turns to commend the efforts of the Babalola and his team for changing the narratives of the Union in Oyo.

Those who spoke at the meeting included the Vice President of the Zone, Comrade Ronke Samo; the National Trustee Officer from the Zone, Comrade Adebayo Akamo; the Chairmen of Ekiti and Ondo States, Comrades Rotimi Ojomoyela and Leke Adegbite respectively, and the Ekiti State Secretary, Comrade Kayode Babatuyi.

They all eulogised Babalola and urged him to continue with the laudable and monumental development in Oyo Council.

They unanimously agreed that the commendation should be included in the Communique of the meeting for the record purpose.

A part of the Communique signed by Adegbite, Babatuyi and the Secretary of Osun Council, Comrade Bukola Elufadejin, stated that, “the house noted with excitement the significant progress recorded by the NUJ Oyo Council, in recent time, hence the house commended members of the State Working Committee led by Comrade Ademola Babalola for setting the pace for a modern Oyo NUJ, urging members and leaders at the Council to sustain the giant strides,”.

In a related development, another senior journalist in Oyo State on Sunday sent a private message to Babalola, describing his administration as ‘awesome’.

He wrote: “I have always follow your unparralell progress and achievements with utmost attention since your assumption of office including the latest strides of SOLADOYE SPOT and refurbishment of PEN junior School school vans, all I need to say is well-done. Some people had the opportunities in the past and used it to enrich their purses but for YOU, the contacts and opportunities are being used to elevate and benefit humanity. God continue to bless you. God bless you and perfect everything that concerns you,”.