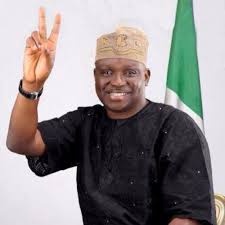 News that the Ogun State People’s Democratic Party, PDP has endorsed ex – Governor Ayo Fayose as the party leader in the South West is indeed a pathetic tale of the desperation of one man to snatch by force what does not belong to him.

That Ayodele Fayose, two time failed ex – governor of Ekiti State thinks the vehicle for leadership of such a great party and politically sophisticated people of the South West is through desperation and grovelling at the feet of nonentities, is indeed unfortunate.
It is a known fact that Ayodele Fayose is working towards the inglorious ambition of the man who has singularly looted Lagos and acquired the state as his personal property. To think that Asiwaju Bola Ahmed Tinubu, still thinks that after all the damning revelations about his profligacy, he can still be considered for the position of President of a great country like Nigeria, is one of the biggest jokes of the decade.
That some elements who call themselves Ogun State PDP members are currently romancing the political disaster and turncoat called Ayo Fayose, shows the unseriousness of the whole bunch.
These so called bunch of ragtags namely, Ladi Adebutu and Dr Sikirulai Ogundele reportedly led all the 14 members of the State Working Committee, Local Govt Party Chairmen and some National Delegates to visit Fayose, in Lagos, did so without consulting the people they claim Fayose leads.
The proud and deeply egalitarian people of the South West and the whole of the Yoruba race, cannot be represented by a few men from Ogun State whose only objective for that visit is seemingly, filthy lucre.
Their pledge of loyalty to a man who is clearly selling out his own party at this moment shows what desperate men would do for money.
Perfidy is not in the blood of the South West people and especially not within the membership of our great party, the PDP, therefore, these lone traitors are entirely on their own and do not speak for party members in the South West.
While they were busy lapping up Fayose’s garbage like hungry dogs, the real leader of the the South West was leading the Yoruba race in an entirely opposite and worthy direction. A man who believes in progress, development, peace and protection of Yorubas people, their lands and property, His Excellency Governor Seyi Makinde, launched a highly disciplined and well trained security force, Amotekun. A man not given to rhetorics, small talks, a man who believes in unity rather than division, a man who dialogues and consults, a man to whom service is non-negotiable has initiated and put to action a force to protect the people from invading marauders, protect their farmlands, their lives, push back bandits and kidnappers and restore Yoruba pride.

Just recently, the Ladoke Akintola University, became solely owned by Oyo Government, with the leadership of Makinde, this is another laudable educational greatness for South West indigenes.

Those unruly band of miscreants from Ogun PDP should be told, if they don’t already know, that leadership or the pronouncement of such is not by drooling saliva all over the place or pledging fake loyalty and making empty declarations, but by actions.
Governor Seyi Makinde has been appointed the leader of the South West PDP and that fact is non-contestable.
By words and actions, Seyi Makinde has proved that he is worthy for the position of leadership of the Yorubas and General of the newly formed Amotekun, an initiative which was welcomed by Yorubas in Nigeria and indeed world over.
Makinde is undeniably, the shinning star of leadership in Nigeria.
Fayose on the other hand, seems to be living by the name he was Christiandom by the respected elder statesman, ex-president Olusegun Obasanjo who referred to him as a ‘prodigal’. He has verbally and publicly challenged the decisions of the National Working committee, NWC and worked against the interest of the party, many times. Ayo Fayose has become an albatross to the PDP and means no good for the party anymore.
The National Chairman of the PDP, Chief Uche Secondus must be very wary of Fayose and his insistence on polarising the PDP in the South West.
The clowns who trooped to Fayose’s Lagos residence for their share of ‘stomach infrastructure’ must remember that they will defecate it all out in the toilet of disgrace, someday soon.

The Ogun state PDP Leadership must first clear the mess they have with the Buruji Kasamu group, that laid claims to Ogun State Exco until the death or the senator. I implore Ladi Adebutu, to do the needful by making Ogun PDP a haven of zero factionalisation rather than hopping around romancing fallen politicians.

I must re-iterate that Governor Seyi Makinde, believes in the great unity of the party, PDP. It’s therefore silly for any one to parade the failed Eddy Olafeso, who contested and lost the governorship primaries of Ondo state for the position of Vice National Chairman, South West PDP. That will not happen.