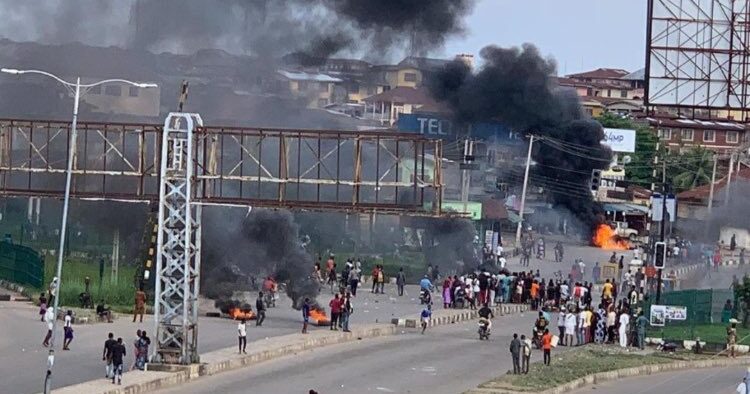 This is to specially thank you all for your overt and covert support to the #EndSARS protests.

The peaceful protest is an integral part of democracy and that is why the Federal and State Governments in the last 12 days have treated the Protesters in a civilised manner but we must be cognizant of the fact that it has taken a different dimension and has been hijacked by hoodlums and People with ulterior motive.

With the latest attacks on the convoys of the two sitting Governors Gboyega Oyetola and Kayode Fayemi of Osun State and Ekiti States respectively; attacks on the Palace of Oba Oyewunmi Ajagungbade III, Soun of Ogbomoso; attacks on the Public and Private facilities; killing of Mr Yohanna Shankuku, the Driver of the Honourable Minister of State for Labour and Employment, Barrister Festus Keyamo, SAN, by the #EndSARS Protesters’ Driver, who made a U – turn, took one way and ran over him in Berger area of Abuja; blocking Governor Udom Gabriel Emmanuel of Akwa Ibom State till he smartly escaped the mob action with Okada man while his security Aides girded him on both sides; killings of Protesters in Ogun, Ondo, Osun, Lagos, Benin City and other parts of the Country by known and yet to be identified gunmen or through road accidents; we saw a viral video that showed some hoodlums walking naked in Public procession among the genuine Protesters, it is obvious that the original Conveners of the protests, who might have meant well, are no longer in control of this volatile situation that can lead to anarchy, if Government does not take firm and urgent steps to protect the lives and livelihood of innocent Nigerians.

This has gone beyond peaceful protest against excesses and abuse of power by the Police and there is nowhere in the World where Government will fold its arms and allow the Country to descend to anarchy.

While we condemn these ugly situations, we are also in full support of a thorough investigation into all these incidents with a view to bringing Perpetriators to book

We rejoice with young Uchechi Promise Echefu from Mbeke Village in Isiala Mbano Local Government Area of Imo State as she bagged first Class Honours and emerged the Best Graduating Student from the NDA (Navy) with other numerous Awards she won herself.

We commiserate with their individual States’ Governors, families and friends and Associates.

May their souls rest in peace.