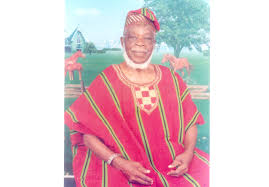 He died on Wednesday night in Osogbo, Osun State capital.

According to Awa Bamiji, Fasanmi who would clock 95 years of age by September 27, passed on yesterday’s evening around 10pm at his residence in Osogbo, after a brief illness, due to his old age.

Funeral rites to be announced later by the family.