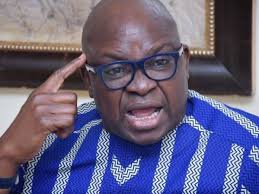 Adeleke was reacting to statements made by Fayose asking PDP leader and elder statesman, Chief Bode George, to go and rest. Fayose had stated that he was quoted out of context with regards to the on-coming elections in Edo State.

Fayose, who crested to power under the PDP twice as governor of Ekiti State had insinuated in a published statement credited to him that he was not in support of the Edo PDP candidate and sitting governor, Godwin Obaseki.

Chief Bode George reacted swiftly by telling party members to disregard Fayose’s statement as it did not reflect the position of the party and blasted Fayose for going against the PDP he had benefited immensely from.

In the same vein, Adeleke wonders how Fayose could be so ungrateful to a benefactor who contributed to his emergence as governor, not once but twice.

He recounts that when Fayose had no money or political clout, it was Chief Bode George who stood by him.

“I took Fayose to Bode George in 2003 when he had no money and Chief Bode George supported him and influenced Chief Olusegun Obasanjo to back Fayose in place of S.K Babalola”.

Adeleke wonders why Fayose will claim Chief George did not contribute financially to his political growth, when indeed Chief Bode George gave him N10million (Ten Million Naira) and got his friend, Chief Bode Olajumoke to donate to Fayose’s campaign.

A miffed Adeleke advised Fayose to check himself very well: “I am surprised he can now open his mouth to tell Bode George to retire, to the extent of saying he ordinarily wouldn’t have dignified Chief George with a reply. Imagine, how ungrateful can anyone become? How much lower can Fayose go? Ungrateful to the man who helped him politically, ungrateful to the party through which he became governor twice.” Adeleke notes that “twice Fayose was made governor under the PDP, twice he handed over to APC; is that not ridiculous enough? He needs to check himself”.

Adeleke says people should stop taking Fayose seriously as he is only romancing the APC because of his case with the EFCC.

“Fayose is simply looking for reprieve and support from the APC to save himself from the case of fraud filed against him”. Adeleke emphasises.

The Pacesetter boss has warned that the Bode George camp will drag Fayose to court over statements he made regarding a certain audio tape: “Fayose claims he has an audio tape of negative comments Chief Bode George made against Ekiti, Rivers and Osun elections. I challenge him to produce the tape now or he should be ready to face the courts of the land for defamation and character assassination, among others