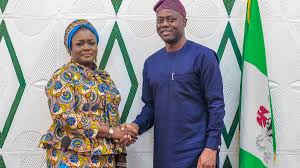 Following the outburst from a chieftain of the Peoples Democratic Party, Engr Femi Babalola on a popular political radio programme held in Ibadan on Saturday where he condemned outrightly the appointment of technocrats into sensitive positions like Secretary to the State Government, Honourable Commissioners among others.

Engr Babalola said a position like the SSG should be held by a pragmatic politician who understands the political terrain of the state. The business mongol was reacting to the appointment of Mrs Olubamiwo Adeosun as the SSG.

His outburst propelled GOAL POACHER NEWS correspondent to conduct an investigation on how the former senator that represented Oyo North from 2011 to 2015, Hosea Agboola popularly called Hallelujah an ally of Governor Seyi Makinde was reportedly penciled down to be appointed as the Secretary to the Oyo State Government.

However, investigation revealed that Late Governor Abiola Ajimobi may have set a landmine for Hallelujah’s appointment by the intrigues that played out at the twilight of his administration in which the former Head of Service, Hannah Ogunesan resigned and Ajimobi appointed Alhaja Ololade Agboola as Ogunesan’s successor. As fate would have it, Ololade Agboola is the wife of Senator Hosea Agboola.

After the inauguration of Engr Seyi Makinde as the Governor of the State, according to investigations, Hallelujah was allegedly prevailed upon to advise his wife to resign as the Head of Service in order to pave the way for his emergence as the SSG.

It was revealed that having husband and wife to head two paramount positions like SSG and HOS will be given different interpretations by aggrieved party members, opposition and the public in general.(Se awon nikan ni) meaning, are they the only one?

Also, unconfirmed reports had it that Senator Olufemi Lanlehin and Sarafadeen Alli were interested in becoming the SSG owing to the coalition that ushered in Seyi Makinde as Governor of the state.

Senator Agboola was reported to have rebuffed the idea that his wife should resign. He was of the opinion that his wife rose to the position of HOS by hard work and excellence. He wouldn’t do anything to cut short the glittering career of his wife for a political position.

The intrigues according to a PDP chieftain in Oyo State and political heavyweight in the South west who didn’t want his name in print said Governor Makinde had to settle for a female who is a technocrat since Chief Ilaka is a core politician just to balance the equation. That was how Mrs Olubamiwo Adeosun became the SSG.

In another development, Governor Makinde wanted to appoint Olufemi Lanlehin as the Chairman Advisory Council but was rejected by Lanlehin who wanted to become the SSG which the Governor was not comfortable with.

Makinde as a man who keeps to promise decided to appoint his staunch ally, Hosea Agboola as the Chairman Advisory Council.

See the breakdown of the top government functionaries in Oyo State, four are politicians while two are technocrats.

The appointment of Adeosun by Seyi Makinde was applauded by every Tom, Dick and Harry being the first woman to be appointed into such exalted position in the history of Oyo State.