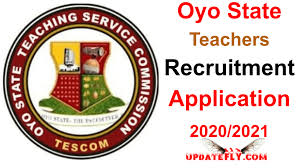 Over six thousand out of about 90,000 candidates who sat for the Oyo State Post Primary Schools Teaching Service scored sixty percent and above at the just concluded Computer Based Test.

Recall GOALPOACHER NEWS had reported earlier on Saturday that the TESCOM’s boss revealed why the cut-off mark wasn’t announced in order not to create apprehension in the minds of applicants.

He noted that TESCOM board would have a roundtable to decide what the cut-off mark would be.