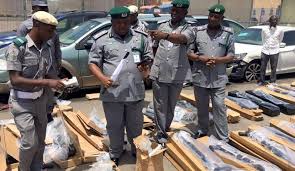 The Nigeria Customs, Oyo/Osun area command has said the officer involved in the shooting of an executive member of the proscribed National Union of Road Transport Workers (NURTW), Lateef Aboki at Iseyin -Moniya park in Iseyin acted outside the rules of Engagement.
This was stated by the Public Relation Officer of Oyo-Osun Area Command, Abullahi Lagos Abiola on Fresh FM Crossfire this Sunday and monitored by GOALPOACHER NEWS.

“I can tell you outrightly, there is no way the Oyo-Osun Command would be involved in such activity, I can assure you non of our residents would be involved on such kind of engagement, the Federal Officers acted outside the rules of engagement. Let me state very clearly that the incident that involved some customs officer. On the contrary to what people actually thought that it was from Oyo-Osun command, they officers from the Federal Operation Unit and Zone A, they were not office from Osun-Oyo Command. It is difficult for us to really have clear understanding of what happened.”
“However, what happened was surprising and worrisome because the people of Iseyin have been working with our Oyo-Osun officers without
any rift. Immediately the incident happened, the Customs Area Comptroller of the command Officer Ngozi quickly directed the residents officers of Iseyin base to quickly intervene for normalcy to be restored in collaboration with the police. I can assure you that normalcy has been restored. The officers are not Oyo-Osun Command, they are Customs officers but they are from Federal Operation Unit deployed to the command to carry out their own statutory responsibility.”
“The Federal Operation Unit are to complement the job of Residents Officers of each command, Federal Operation are deployed to each command and we have been working hand in hand but they are answerable to the Federal Operation Unit, Ikeja, they don’t take directives from us, meanwhile, they still work hand in hand in collaboration with us.”

GOALPOACHER had reported yesterday that officer of the Nigerian Customs along with three others in mufty in a private Lexus Jeep allegedly chased a public transport vehicle to the park on suspicion of the vehicle carrying a bag of rice. The Nigerian Customs is yet to reveal the identity of the officer who shot the innocent driver. Further checks by GOALPOACHER NEWS showed that the victim was responding to treatment as at the time of filing this report.