The Governor of Oyo state Engr. Seyi Makinde have responded to the claims and request for the students of Oyo state saying he has them at heart.

The Special Assistant to the Governor on student matters Hon. Victor Olojede made this statement while fielding questions from pressmen regarding the plight of the students of Oyo state who sent an ultimatum to the Governor on their request for busary support. 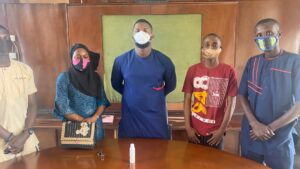 Hon. Victor said “We understand that life as a student isn’t easy and every of the students organisations in Oyo state have put forward their request on several occasions, I want to state it categorically that in a short while the students will hear from Us”

He said ” we had a meeting earlier last month in which palliatives were distributed to the students and we discussed extensively on how to distribute the support fund, meanwhile, everything in this government is going through due process and all protocol must be followed to letter, to achieve the desired results, if you take a good look at the TESCOM recruitment process you’ll see that everything is well planned and articulate and we believe the desired results will be achieved”

The government hereby implore the student to remain calm and patient in their dealings with the government of the day, the Office of the Special Assistant on Students Matters to the Governor is always open for consultation, whenever there’s need,.

The federation of Oyo state students Union had earlier today 13th August made a press release giving the government of the state and ultimatum to provide modalities for which it will roll out student support finds (busary) in order to supports the students of Oyo state in various tertiary institutions.

It will be recalled that at the early days of the assumption of office of Eng. Seyi Makinde as the governor of Oyo state, He pledged to provide support of one hundred thousand naira for students of Oyo state in Laws school which he fulfilled, therefore, there are high believe that the governor will definitely not leave out students in other institutions out of his Goodwill.