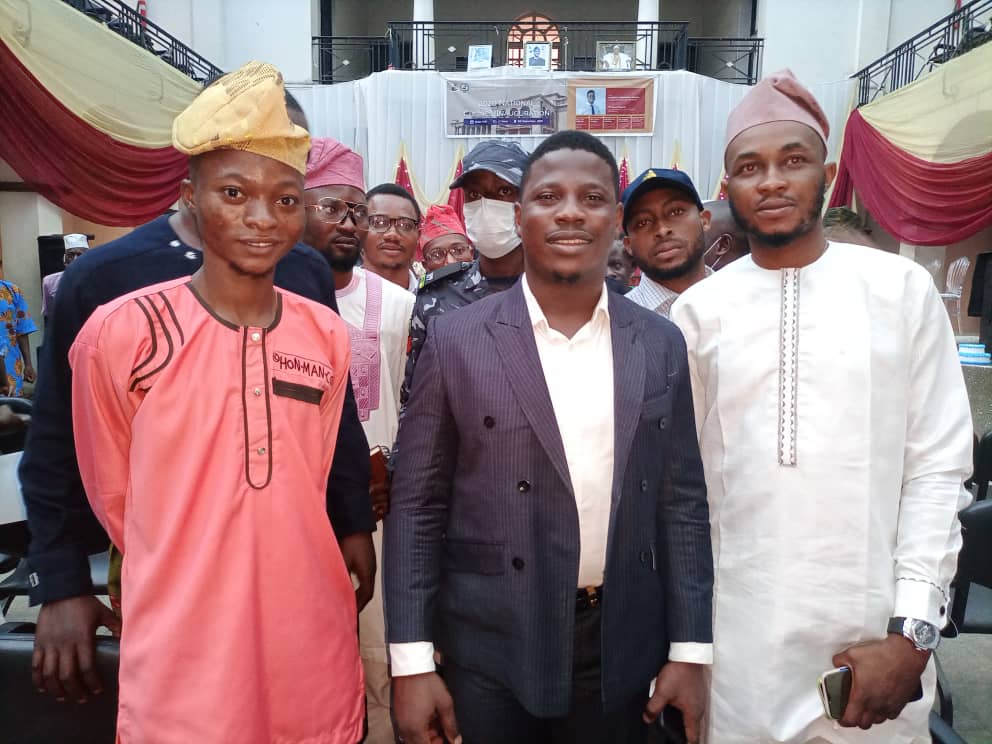 Oyo State Commissioner for Youth and Sports, Asiwaju Seun Fakorede has charged students of Higher Institutions of Learning to place patriotism over parochialism.

The vibrant commissioner stated this on Saturday at the inauguration of Federation of Ibadan Students’ Union (FIBSU), 2020 National Council held at Mapo Hall, Ibadan . His words:

“It is an honour to be standing here with you, a privilege in fact, one I do not take lightly. I stand here understanding the implication of leadership and then the implication of Student Union leadership. Some of the world’s best leaders were initially just students with a belief, a value, a selfless need to make the system better than they met it.”

“Over the years, Student Unions all over Nigeria have proven to have, embedded in it, the purest forms of selfless leadership. From the days of men like Gbenga Olawepo-Hashim who as a student stood against the pro-apartheid regime of the UK Government and alongside his friends, staged a protest on the then Prime Minister’s visit to Nigeria which earned them solitary confinement for 4 months. Or to the days of the Greensboro 4 — Four Black Teenagers who decided to stage a sit-in at a white only bar, they decided they were not going to leave if they were not attended to, only because they were black. Those brave boys — Ezell Blair Jr., 18; Franklin McCain, 19; Joseph McNeil, 17; and David Richmond, 18, all students at the North Carolina Agricultural and Technical State University — made their stand on the 1st of February, 1960. Within three days, they were joined by some 300 others. By summer, the sit-ins had spread to more than 50 cities, and lunch counters were rapidly desegregating.The sit-in movement soon spread to college towns throughout the South. Their actions made an immediate and lasting impact, forcing Woolworth’s and other establishments to change their segregationist policies. And to the days of our own student Martyr, George Yemi Iwilade a.k.a Afrika of Obafemi Awolowo University, who is remembered for meeting death in his stand against the evil of his days. And to the men and women who have fought relentlessly in various institutions for the voice of the students to be heard.”

“Student unionism represents our formative years as leaders and right at the heart of it are some of the most vital lessons you will ever learn in the area of leadership, people and expectation management. I say this because this was my experience.”

“A few years ago, I ran for the office of the President of the Student Union in my undergraduate years. We had set up a team, we had come up with what was an untouchable and uncommon strategy, we had a robust team of cerebral men and women who believed in the change that I preached and in the future that I came to sell. And we chased down this goal of Presidency with our whole hearts. We lost, we lost woefully or at least that’s what it looked like in numbers. It was a devastating blow on my team but we accepted defeat, visited the winner and promised him support during his one year reign. I realised that if truly the goal of running was for a better community, then a loss should only propel one to find other ways to achieve this objective since for me and my team, the essence for the office was a goal, so without the office, we don’t begin to fight relentlessly for that office but begin to find other ways to achieve the initial goal even without the office. Let me mention that the goal is not necessarily to be the change, the goal is to effect change but you cannot effect a change to the world if you’ve not convincingly made that change in your life, first.”

“We kept up with our projects and courses to help better our community. In one year, I won the most Influential Student in Nigeria, this even without a student union office. By implication, every one of us has a role to play in leadership. Today, I currently carry the mantle of youth leadership in Oyo State, a very heavy cap that I wear with all humility but it will be wrong to leave out the place of focused men and women who have played a crucial role in all my leadership opportunities, who have supported in many different ways that have helped amplified my voice and made my vision clearer. Without them, there might have been no me.”

“No matter where you find yourself, no matter the industry, country or sector, there’s a leader somewhere, a people somewhere, a course somewhere that is hoping it can trust you. That it can trust you to stand for the truth, support this truth and pursue victory for this truth. By implication, an entire chain of events is reliant on you to selflessly play your part, not from the place of tribal or religious sentiments but from the place of wanting development for the common man.”

“Unionism is not war amongst students, it’s radical collaboration — an intentional partnership amongst people with very different ideologies to leave the system in a better place than they met it. The question now is, will you allow yourself be a partner on this course, determined to leave the system better than you met it, to do your bit in the advancement of the society?

“In reality, people don’t expect government to solve all their problems. But they sense, deep in their bone marrows, that with just a slight change in priorities, we can make sure that every Youth in Oyo State has a decent shot at life, and that the doors of opportunity remain open to all.”

“They know we can do better. And they want that choice. In this administration, we offer that choice. The good people of Oyo State have chosen a man to lead us who embodies the best this State has to offer. This man called Seyi Makinde understands the ideals of community, faith, and service because they’ve defined his life. From his outstanding service and philanthropy to our communities, to his years as an astute businessman and leader, he has devoted himself to this State. Again and again, we’ve seen him make tough choices when easier ones were available.”

“In no other State on earth, is my story even possible! Governor Seyi Makinde, His values — and his record — affirm what is best in us. He believes in an Oyo State where hard work is rewarded; so instead of offering opportunities to those who will use the proceeds to solely benefit outsiders or their pecuniary interests, he offers them to indigenous individuals and bodies here in the State.”

“Now, fellow Unionists, whilst I believe that in an ideal society protests must be an option sometimes, but it should never be the first option. There’s what we call the three Cs of Unionism and Engagement — Consultation, Consolidation and Confrontation. Frankly, Unionism isn’t primarily for protests against Government and other constituted authorities. The true essence of Unionism is for emancipation. This again reminds me of my uni days — the motto of our Union was “Intellectual Fighters for Emancipation”, and is expected that all our engagements but be done cerebrally, we don’t just fight, we fight intellectually.”

“We should not dare to put the cart before the horse but rather embrace and exhaust all constructive engagements before severe demonstrations for all our emancipations. If we abide by this, then the sacrosanctity of our Unions will forever be preserved. Clearly, it’s upon this generation to do and lead better. I strongly believe we can, so lets start by renewing our convictions, drive and priorities. Don’t run after cheap publicity, this is not the time to gather popularity, it is the time to collectively gather power and traction towards the common goal. To speak of our different challenges but with one voice, to prioritise us a people over us as anything else.”

“It’s time for youths to not just theoretically take responsibility but to actively play a part in this entity called Nigeria. Youths are not the leaders of tomorrow, neither are they the leaders of today — Competence is the leader of both today and tomorrow. Now is the time to build competence, now is the time to learn the meaning of selflessness, that is to do it with no consideration of your personal interest but with your eyes and mind only on the common good of the common man.”

“You know, a while back, I met two gentlemen in their twenties named, ASP Oduniyi Omotayo and ASP Animashaun Mudathir. They were ambitious good-looking men, with an easy countenance. They shared with me their drive and vision, and how they were working assiduously to change the narrative and perception of the Nigerian Police and Youth. And as I listened to them explain why they’d enlisted, the absolute faith they had in our country and the leadership of our dear State, their devotion to duty and service, I thought these men were all that any of us might hope for in a Youth. But then I asked myself: Are we serving Oduniyi and Animashaun as well as they are serving us?

“Again, the youths, neither the elders are not the owners of any leadership position. Competence and capacity are the truest requirement for leadership in any form, at any level — Here is an opportunity to build that capacity, don’t lose it to the hands of myopic ideologies and miss out on the greater good.”