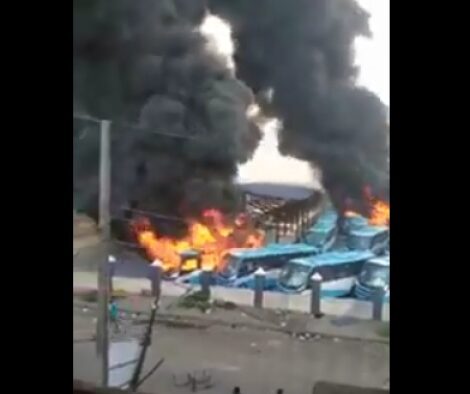 The electronic media arm of former Lagos State Governor, Asiwaju Bola Tinubu’s media empire in Lagos came under attack on Wednesday morning. Both Television Continental (TVC) and MAX FM went off air after being set on fire by yet-to-be-identified persons.

Also on Wednesday morning, hoodlums set the Oyingbo Terminal Bus on Lagos Mainland on fire, resulting in the burning of over 20 buses.

On Lagos Island, suspected hoodlums breached the headquarters of the Nigerian Ports Authority (NPA), Marina, setting fire to the building.

The attacks are believed to be fallouts of the gun attack, on Tuesday night, on #EndSARS protesters at the Lekki tollgate on Lagos Island.

Contrary to reports, the State Governor, Mr. Babajide Sanwo-Olu, said in a broadcast this morning that nobody died in the shooting.

Although Governor Sanwo-Olu blamed the military for the attack, the Nigerian Army has ejected responsibility.

Tinubu, National Leader of the ruling All Progressives Congress (APC), has equally distanced himself from the shootings after some commentators accused him of having ordered the switching off of the lights and CCTV at the Lekki tollgate. He also denied being the owner of the company that built and operates the tollgate.

Share on:
WhatsApp
Previous Article
Protest:Bad Eggs in Human Skin Have Hijacked This Noble Cause With Their Evil Acts- Bobola Agbeja
Next Article
UPDATE: Mob Burns Down Sanwo-Olu’s Family Home on Lagos Island