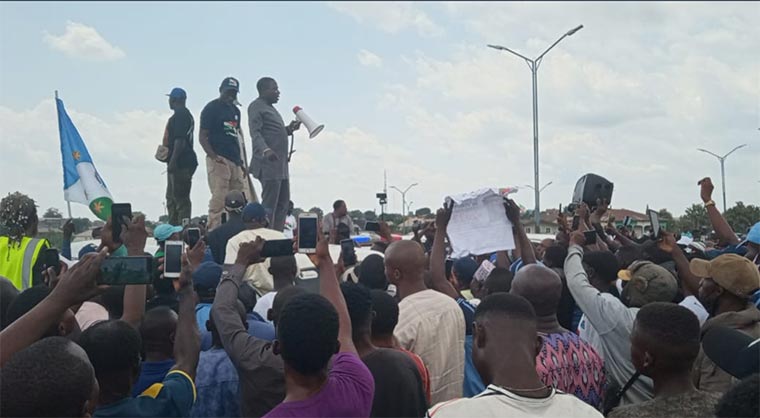 Chief Sunday Adeyemo, popularly known as Sunday Igboho, on Saturday, declared that elections would no longer be allowed in Yorubaland until the region became an independent nation.

Igboho, who spoke in Yoruba language at a Yoruba nation rally held at the Nelson Mandela Freedom Park in Osogbo, Osun State, also told his supporters to stop attacking governors in the South-West region, saying all of them were in support of efforts to get an independent Yoruba nation.

According to him, the South-West governors could not openly associate with the agitators. He added that the Federal Government might stop their monthly allocation, if the governors declared open support for the cause.

While calling for an immediaarrested Isikilu Wakili in Igangan, Oyo State, the agitator condemned the killing of residents of Iseyin by Customs men, saying failure to prosecute criminal herdsmen had emboldened them to commit more atrocities in the region.

He said, “I can’t be cowed or intimidated. They said I would be arrested. Who would dare do that? We are no longer part of Nigeria. We won’t have anything to do with them again. There is no election again in Yorubaland until we have a Yoruba nation. Those in authority initially thought we were joking when we demanded an independent Yoruba nation.

“All our governors are with us. From Oyo, Ogun and Ondo to Ekiti, Lagos and Osun, they are supporting us, but they can’t do it openly. Allocation they give them in Abuja may stop if they do it openly. So, don’t abuse them again. Governor (Gboyega) Oyetola was informed I will be in Osun and he allowed us to come here. All our monarchs are with us.

“We are also demanding an immediate end to the prosecution of OPC men that were arrested in Ibarapa land. That is part of the injustice we are talking about. They are still locked up. They didn’t commit any crime. They only stopped and arrested criminals. All the heads of the military, paramilitary and police are Fulani men. We won’t have anything to do with them again.”

Igboho insisted that the Yoruba people would no longer be part of Nigeria, saying lopsidedness in sharing leadership positions in the military and paramilitary, and high crime rate linked to Fulani herders across the region would not end until the Yoruba became an independent nation.

He also demanded immediate action by all stakeholders in the region to actualise an independent Yoruba nation, saying if they acted otherwise, the people would revolt against them.

Before the rally was eventually held, there was heavy presence of the police and the Nigeria Security and Civil Defence Corps at the venue, which forced the organisers to change tactics.

Around 9am, when our correspondent left the venue, none of the organisers of the rally had arrived at the area, but the participants, who had regrouped under November 27 Bridge, Osogbo, later embarked on a procession amid singing and drumming along Gbongan/Osogbo Road back to Nelson Mandela Freedom Park, where organisers of the rally took turns addressing them.

Despite the heavy presence of the police, NSCDC and the Department of State Services, the participants entered the venue and staged the rally.

In his remarks, ex-Director General, National Troupe, Akin Adejuwon, said the group, Ilana Omo Oodua, was behind the rally, meant to sensitise them on why they should stop a “gradual takeover” of their land by Fulani bandits.
He said, “The rally is to sensitise people, especially the youth, because they own the land and some Fulani bandits are gradually taking over the land which belongs to our youth. Once they grab the message, 1,000 Fulani bandits would no longer be able to confront them. We are doing sensitisation across major cities in Yorubaland.”

However, Senator Shehu Sani, who represented Kaduna Central in the 8th Senate, said the rainfall that “dispersed” the agitators at the Nelson Mandela Freedom Park was a “divine message” for them to change their minds and embrace a united Nigeria.

Sani, in a tweet, said, “The heavy rainfall that dispersed the separatist agitators in Osogbo is a divine message for them to change course and work for the unity of our country. The idea of an ethnic or religious purist state stems from a xenophobic mind intolerant to co-existence.”