Federal House of Representatives Committee on Diaspora Affairs, says effective partnership of all tiers of governments, especially Wives of State Governors and other relevant stakeholders will enhance Nigeria’s fight against human trafficking in the country.

The Chairman of the Committee, Hon. (Mrs) Tolulope Akande-Sadipe K, made this known today in an interview with newsmen, as part of activities marking the 2020 World Day Against Trafficking Persons. 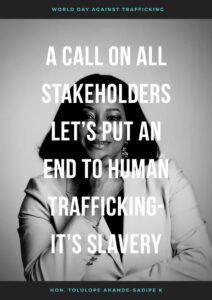 Akande Sadipe, expressed worry over the high-level of trafficking, inviting, Wives of Governors in the to rise against this and other vices against females in order to end the evil act. This is another form of violence against women, she said
“The best way to eradicate this evil among us is to work in unisom. Wives of Governors should use their offices to advocate against this act”. The traficking agents and their collaborators are not more powerful than those who mean well for the people of this Nation.
Hon. Akande-Sadipe revealed that her recent meeting with the Wife of Ogun State Governor, Mrs. Bamidele Abiodun, which yielded positive enthusiasm by the Governor’s wife shows that there could be fruitful collaborations with wives of Governors to bring this embarrassing scourge to an end
“This action will ensure that we build awareness in our various states and discourage and educate parents and our girls on the risk of foreign domestic servitude and the lies of agents who end up trafficking them into dangerous situations”.
“We would ensure that the collaboration focuses on rehabilitation, engaging effective sensitisation, workshops and seminars across communities, schools, churches, mosques markets, and other public places”, to the remotest parts of our nation, she added.
Mrs. Sadipe also thanked the Nigerian Ambassador to Lebanon, Ambassador Goni Modu Zanna Bura, who recently came to the aid of thirty Nigerian girls in Lebanon, who were forcefully ejected by their landlord.
“I spoke to the Nigerian Ambassador in Lebanon yesterday and his response was inspiring as he had put in place some emergency palliatives for the girls in Lebanon”, she said.
“we also want to encourage Fed. Min of Women Affairs, Ministries of Women Affairs in each State, Local government authorities and relevant government agencies and other stakeholders to partner with, so that this trafficking menace would be a thing of the past”. 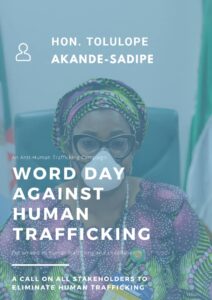 World Day against Trafficking in Persons is held annually on July 30. People trafficking and modern day slavery is recognized by the UN as a massive worldwide problem with very few countries immune to human trafficking.
Reports revealed about eighty thousand Nigerians are currently held as sex slaves and in forced labour across the world, in countries like Lebanon, Mali and the Middle East. Nigeria “we need to stand up for our children”. Hon. Akande-Sadipe reiterated her commitment to ensuring legislation to discourage Human Traficking. She is working auspiciously with the Nigerians in Diaspora Commission (NIDCOM) and National Agency for the Prohibition of Trafficking in Persons (NAPTIP).