The first-of-its-kind strategic meeting with the Army chief centered on how OYRTMA could better partner the Nigerian Army in the specific areas of emergency response, enforcement, effective traffic management, information sharing and continuous training of personnel.

The G.O.C. warmly received the Executive Chairman and assured of the military’s readiness to collaborate with the agency in a view to actualizing its core mandate of maintaining sanity across roads in Oyo State.

In his words, the Army Boss said “While the organization of the transportation sector remains a cursory indicator to any decent society, cooperation between the Army and OYRTMA would lead to a greater success in all ramifications of the Oyo State economy viz security, health, agriculture et. al in line with the drive of the Governor Seyi Makinde’s administration. 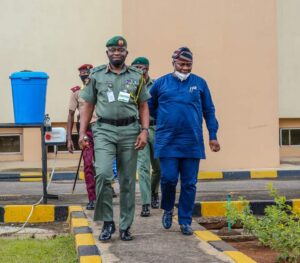 Therefore, I assure this gathering that the Army would assist in all ways possible to double or even triple the successes that OYRTMA has so far recorded since its establishment’.
Furthermore, the GOC seized the occasion to express deep appreciation of the 2 Division, Nigerian Army to Governor Seyi Makinde for his perpetual support and enabling environment the Army enjoys under his administration particularly as agencies of the State Government are more than ever before ready to collaborate with the Army to improve Security and maintain law and order in the State. 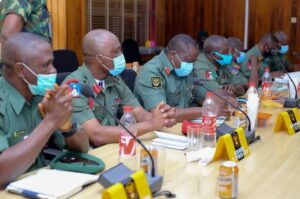 On his part, Mogaji Akin Fagbemi assured that OYRTMA shall do all within the ambits of the Authority’s enabling laws to join hands with the Army in achieving the four cardinal objectives of the Executive Governor, Engr. Seyi Makinde in the specific areas of Education, Health, Security and Economic prosperity. 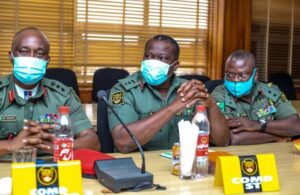 The G.O.C. also seized the opportunity to present a complimentary award for the great services OYRTMA is rendering to the people of the State particularly since the advent of Governor Seyi Makinde.