The Chairman Oyo State Universal Basic Education Board, Dr Nureni Aderemi Adeniran has presented to the residents of the state what his agency has been able to achieve so far since he got appointed by Governor Seyi Makinde over a year ago even as he promised to do more in the education sub-sector.

Adeniran who was a gubernatorial aspirant on the platform of African Democratic Congress (ADC), in 2019 before returning to the Peoples Democratic Party weeks to the general elections listed the agency’s achievements while having media parley with some journalists on Monday.

His words: I was appointed on 24th June, 2019. Between 26th June 2019 till date, we can conveniently say that so far so good, we have been able to go to some levels. Immediately I came on board and I received the briefs from different departments, the team swung into action. 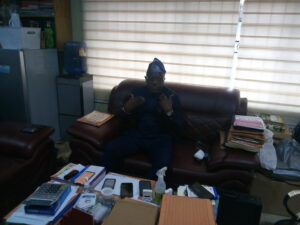 The first I did was to study the list of projects that were ongoing, I went on a tour to the 33 local government areas and I can make bold to tell you that in about one month and few days, I was able to cover all the LGAs. I called on the contractors who had abandoned the projects awarded by the previous administration to comeback to the various projects sites and complete them.”

“We thank God we have been able to achieve a very great achievement in that aspect. That’s why you heard in the media then that the completed ones were Ajimobi’s projects. If Ajimobi started a project and he couldn’t complete it, will the new administration come on board to abandon it, of what benefit will that be for the good people of Oyo State? There were some projects we met at foundation level, but to the glory of God today, they have been completed. If we had abandoned them, what will Bethe fate of our children that need these infrastructure?

So we have been able to that and we have achieved a lot in that respect. Out of about 54 projects they had, within our first hundred days in office, we were able to complete 6 or 7 projects commissioned by Governor Seyi Makinde. Before the Governor’s first year in office, we were able to complete about 25 model schools. Aside from the other block of classrooms, there some renovations that we have been able to complete. All these strides were made possible because of the policy of this new administration as well as the effectiveness of the board and management of Oyo SUBEB under my leadership. ”

“Apart from the aspect of projects, what we have in SUBEB is much more than that. Standard or quality is one of the things. I can assure you that since we came on board, we have been engaging in regular monitoring of our schools in terms of teaching and learning, to the extent that our index has improved with the national level. Yes, the SDG in their assessment, Oyo State was about 27 on the list, we are now between first to eleven in the performance of our students in public primary schools, we are not resting on our hoarse. We will get to the point where we belong as the Pace Setter in the country.”

“Furthermore, our activities have not been restricted to Ibadan city. What we do monitoring of exams in all the different zones in the state. When schools resumed after COVID-19 lockdown, we monitored the schools , we went round all the five zones for on the spot assessment. When common entrance exam was conduct for primary six pupils, it wasn’t our responsibility to conduct the exam, it was done by the Ministry of Education. Since the pupils involved are our own, we monitored them and ensured we deployed our officials to went round all the zones simultaneously. That initiative has never happened before. People are now conscious that SUBEB can now be at their offices at any point in time.”

“As part of the measures to enhance improved teaching and learning, we have introduced special period for reading, special period for writing because we discovered that even in Secondary Schools, some of our children can not read and write. We believe this will the quality of students we are turning out. We have also introduced Open Day system into our Public Schools where there will be interaction between the parents and teachers about the activities of their children and wards.”