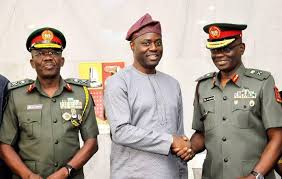 The Oyo State government has warned indigenes and residents of the state to be wary of scammers circulating a fake 2020/2021 recruitment form into the Army.
The government, in a statement by the Chief Press Secretary to Governor Seyi Makinde, Mr. Taiwo Adisa, indicated that the state has been made to understand that the form for 2020/2021 recruitment exercise currently in circulation is fake.
It urged members of the public to be wary of scammers offering fake windows of enlistment into the Nigerian Army.
According to the statement, the warning became imperative following a letter of disclaimer from the Directorate of Army Recruitment Resettlement and Reserve (DARRR), which was addressed to the Secretary to the State Government, Mrs. Olubamiwo Adeosun.
The statement maintained that in the letter, the DARRR requested the state to alert its indigenes and residents to the circulation of the fake recruitment form through an equally fake website: http.//recruitment.army.mil.ng, adding that the DARRR Portal for Application Form was not yet opened.
The statement said: “On Wednesday, 15th July, 2020, in a letter addressed to the Secretary to the Oyo State Government and signed by Major O.J. Ofem, the State Recruitment Officer of the Directorate of Army Recruitment Resettlement and Reserve (DARRR), the Oyo State Recruitment Office of the Directorate requested the government to warn citizens of the state on the ongoing circulation of fake recruitment form 2020/2021 into the Army.
“The Directorate made it clear that it has nothing to do with the fake form being obtained through an equally fake website that had no link whatsoever to the official website of the Directorate, stating that its portal for application form for 80 Regular Recruits Intake has not been opened.
“The Directorate had also in the disclaimer informed members of the public to access all information relating to it through its official website: https://recruitment.army.mil.ng, warning them to be wary of fraudsters/scammers.”
“Therefore, residents of Oyo State are hereby warned to be on the alert and be wary of some unscrupulous elements in the society, who may try to hoodwink them into a bogus recruitment scheme and thereby swindle them,” the statement added.