Oyo State Governor,Seyi Makinde has given immediate approval for the payment of Covid 19 hazard allowance to all health workers across the state. 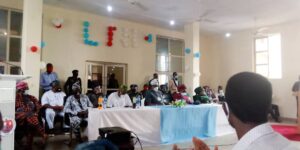 According to the Governor,he has ordered  increase in the subvention for LAUTECH Teaching Hospital which is expected to take care of the new minimum wage,2016/2017 arrears as well as payment of salaries of recently re-engaged health workers starting from end of this month.

The Governor also promised to look into cases of 46 disengaged staff of  Lautech teaching hospital Ogbomoso stressing that if they have genuine cases all those staff wiuld be immediately reinstated.

Governor Seyi Makinde said his administration woull strive hard to complete all abandoned projects irrespective of the administration that initiated them for the progress of the state.

The Number one citizen of the state solicited the support of the health workers to improve the health sector and increased the state Internally Generated revenue.

Earlier in his remarks,the Chief medical director Lautech teaching hospital Ogbomoso,Prof Oladimeji Opadijo said the teaching hospital has a virology building that needs to be developed in order to take care of viral study, diagnosis and clinical intervention of viral out breaks of any sorts of well developed and financed.

In their various remarks, leaders of various associations in the teaching hospital commended the Governor for his concern to their welfare and appeal for more gestures while promising to key into his health agenda for the state, inline with his road map for accelerated development.