Governor Seyi Makinde stated this in Oyo town while flagging off the construction of an ultra modern Akesan Market Complex this Tuesday.

According to Governor Makinde the New Akesan Market will have 352 lock up shops, Administration block road Network, cold Room,Police Station among others .

The Governor explained that the contractor handling the project is from Oyo town while the construction of the market has been divided into two faces. 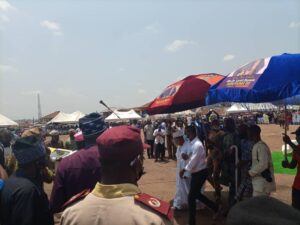 In his remarks,the Alaafin of Oyo,Oba Lamidi Adeyemi 111 appreciated the state government for giving priority to the construction of Akesan Market.

In his address of welcome, The Chairman of Oyo East local government,Hon Saheed Arowosaye said reconstruction of Akesan Market would boost the social economy development of Oyo state.

GOALPOACHER NEWS correspondent who was at the event reports that Deputy Governor of the state,Egnr Rauf Olaniyan, Secretary to the state government,Mrs Olubamiwo Adeosun,some members of the state executive council, traditional chiefs and market leaders attended the programme.