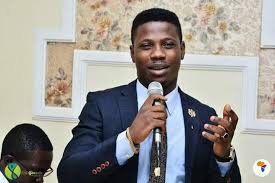 It was an epoch event today in Ogbomoso as Honourable Commissioner for Youth and Sports Asiwaju Seun Fakorede who was represented by Comrade Adegboyega Stephen commended Prince TUNDE Aremu popularly known as IRỌRUN ÀGBẸ at the final stage of AYO ỌLỌPỌN and DRAUGHTS.

Adegboyega Stephen said, the government of Oyo state is proud of Irorun agbe for unifying and empowering youths through sports most especially AYO ỌLỌPỌN which has been neglected over the years. Many believed the game is for jobless people but close observation of what we are seeing here today says otherwise as the game has really unify and empower the youths of Ogbomosoland.

He further charged IRỌRUN ÀGBẸ not to relent in his philanthropic activities to the government of Oyo state most especially Ogbomoso.

I want to assure you, the government of Oyo state will partner with you in the subsequent ones and by the grace of God, Ogbomoso stadium which is under renovation and upgrading will be commissioned next and I can assure you that next game will be hosted in the stadium 🏟 arena.

In his word, the representative said, just days ago, Oyo state TENNIS was kick started  by His Excellency, Governor Seyi Makinde, this is done to engage the youths through sports. By the grace of God, Oyo state football amateur league will commence soon.

The government of Oyo state is making effort to improve the IGR through sports, many taught sport is just only football but see what has happened here today. You can see that gifts worth millions like motorcycles, refrigerators, fans, generators etc was won by participants across the 5 LGs and LCDAs in Ogbomoso.

Let me assure you, we will make sure this initiative which has been abandoned in the state for years will be widely resuscitated to promote peace, unity and love.

In his reaction, Prince Tunde Aremu aka Irọrun àgbẹ thanked the government of Oyo state for being part of the third edition of the programme. He assured the people that he will never relent in giving back to his people. I’m doing this because I know what it is to be poor. Yes, l have lived poor in the past but thank God l am a living testimony today. He charged others who are blessed, to come down to the grassroot and join him to eradicate poverty in our society.

I am not competing with anyone but I believe if we can also support government with the little we have, our society will live better. He thanked  all the participants and assured them of better edition next year.