Makinde, had earlier in the week, paid a visit to the Olubadan, to congratulate him on his 92nd birthday.

During the visit, the governor said that his administration would do all that is needed for all the traditional rulers in the state and that as someone with good upbringing, he would never disrespect elders.

Presenting the escort van on behalf of the governor, the Deputy Chief of Staff, Mr. Abdul-Mojeed Mogbonjubola, said: ‘We need to thank God for his excellency and the kind of person he is. He is a very proactive person.”

“Some few days ago, his Imperial Majesty, Oba Saliu Adetunji, Ogunguniso, asked his excellency for a pilot car, that the one he has been using is not good. And being the person his excellency is, he quickly responded and that is the kind of a person we are looking for to govern this state and we need to thank God for that.” 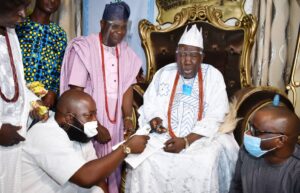 Answering question on the promptness attached to the monarch’s request, Mogbonjubola said: “The governor thought of it. He is just a proactive person. The Olubadan of Ibadanland is like his father. So, it’s like a father making a request from him, what do you expect him to do? That is why he is responding that speedily.”

Responding on behalf of the Olubadan, the Ekarun Olubadan, High Chief Amidu Ajibade, expressed appreciation to the governor for the gesture, adding that, the monarch made the request four days earlier and the governor fulfilled his pledge, praying for his success in office.