Makinde moves to raise status of Secretary, LG Pension Board Staff to PS

Makinde moves to raise status of Secretary, LG Pension Board Staff to PS 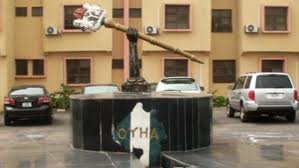 The Oyo state governor, Engineer Seyi Makinde has decided to raise the status of the Secretary, Local Government Staff Pension Board to that of a permanent secretary.

This was revealed in an executive bill forwarded to the Oyo state House of Assembly by the executive council of the state to consider the request of the governor and change the Secretary’s position of the state Local Government Staff Pension Board to that of permanent Secretary.

While reading the executive message to other lawmakers during the House Thursday’s plenary, the speaker, Oyo State house of assembly, Rt. Hon. Adebo Ogundoyin, confirmed the receipt of the executive council extract on local government staff pension fund bill, 2020 which backed the request of the state governor, engineer Seyi Makinde to re-engineer the structure the local government staff pension board.

Also, the speaker, Adebo Ogundoyin has okayed a meeting between the house joint committees on Security and Human Rights with the state commissioner of police, Joe Enwonwu and his assistant in charge of the operation of the state Special Anti-Robbery Squad, SARS, over the Akinyele Serial Killer escape and violation of human rights respectively, slated to hold on Monday, 24th August 2020.

The amendment which was passed during the Thursday plenary improve the welfarism and salary payment of the staff.

According to the Speaker, Rt. Hon. Adebo Ogundoyin, the board shall be henceforth responsible for the payment of the salaries of the primary healthcare workers in the State.

“The board will now maintain an account into which the Gross Salaries of all Primary Health Care Workers in the local government areas of the State shall be remitted.

“The remittance by the local government shall be done by third week of the month. We believe tho will improve the welfarism and encourage health workers, who labour day and night caring for the sick at the grassroot.