Acts of Governor Makinde Are Beyond Party Lines- Idowu Ogedengbe

Acts of Governor Makinde Are Beyond Party Lines- Idowu Ogedengbe 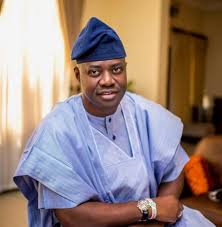 Earlier yesterday, I was with Governor Seyi Makinde as we attended the wedding of Bolaji, the son of the Director General of Operation Burst in Oyo State. Col. Oladipo Ajibola (Rtd).

Seated right in the midst of the congregation was Major General Oladayo Popoola (Rtd), former military Governor of Oyo and Ogun states, a very humble and unassuming man. He had been in the service before we arrived. Also attending the wedding, among many other dignitaries, was a gospel artiste, Evangelist Funmi Aragbaiye of “Emi Orun Sokale” fame. Her music made waves on the radio at some point.

The Pastor of the Church had prayed for the couple that they will be parents to presidents and governors after he had acknowledged that they were blessed to have the first gentleman in the State, referring to GSM, gracing the occassion. GSM was to latter add his prayers to this by asking the Lord to bless the couple with children that will be blessings to their generation. While drawing from the experience of being married to the same woman for the past 23 years, he encouraged the couple to trust God as they embark on the new journey they were starting today noting that there will be turbulence along the way.

Attending weddings have always brought back beautiful and fond memories to me. Being married to Oluwatoyin is one of the greatest favours God has done for me in life. After about four years of waiting for her, she finally accepted to marry me and we got wedded on May 18th, 2002. We also would have loved to have a Governor like GSM as special guest of honour at our wedding but definitely not a politician with the personality of the then Governor of Lagos, the state where we had our wedding. Thankfully, we had the former CEO of Omega Bank, Dr. Segun Agbetuyi who was Chairman of the wedding reception. Dr Agbetuyi was also a protege of my mentor, Mr. Victor Ake Odozi, at that time.

Back to my story. As we made our way towards GSM’S residence in the Executive Bus, where a few of us were all seated together with GSM and the first lady, news got to us that the residence of one of the APC stalwarts in the State, Senator Teslim Folarin was being invaded by miscreants who broke into the premises with a view to making away with some motorcycles that he had purchased towards empowering some youths in the State.

Governir Seyi Makinde in his usual kind Heartedness  ensured that the men of operation burst were immediately deployed to stop the looters and recover the motorcycles from them. This is a true show of sportsmanship. GSM did not turn a blind eye to the occurrence, rather he acted swiftly to prevent the looters from carting away the motorcycles. This is what some politicians would have done, especially to someone in the opposition. But that wasn’t GSM. He used the authority of his office to provide succour to an obvious political opponent.

This was the same Senator Teslim Folarin that was seen and heard in a video that went viral sometime last year stating that the ruling Peoples Democratic Party, PDP, under the leadership of GSM as the leader, cannot escape one of the two traps his party had set.

Having survived all the traps and waxed stronger as a leader of true progressives not only in Oyo State but the South West of Nigeria, Governor Seyi Makinde would rather seek to make himself a friend of many than to make a foe of few.

He is not only kind to friends within his party, his friendliness goes beyond party lines. Right there as we sat in his living room, he told us he had put a call through to the Senator. What a statesman.

We truly haven’t had a leader like this in a very long while. Oyo State, the Yoruba race and indeed the whole of Nigeria is blessed to have a man like GSM raised on high within our nation’s political landscape, at such a time as this.